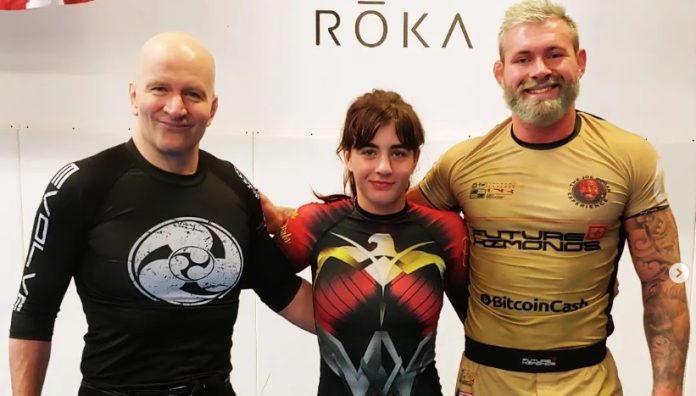 Fifteen-year-old, famously pigtail-sporting Helena Crevar may only technically be a blue belt in jiu-jitsu, but she’s already racked up an impressive array of accomplishments in the sport, including six gold medals at Pan Kids, four NAGA expert division championships, and five Fight 2 Win championships, per Grappling Insider’s Lucy Wynne.

For a competitor as young as Crevar, that’s just the beginning. Shortly after Christmas, the teen announced via Instagram that her parents have made the move to Austin, Texas – where Crevar will be officially joining John Danaher and Gordon Ryan at New Wave Jiu-Jitsu. Crevar’s announcement showcases a photo of her standing beside Danaher and Ryan.

In the caption, she states, “I’m super grateful for this opportunity and looking forward to represent[ing] New Wave!”

Danaher has previously gone on record with Jiujiteira Magazine expressing a sense of regret at the fact that he has not yet produced a female champion in jiu-jitsu, referring to it as “one of the great failures” of his career. However, in the same interview, he appeared to remain hopeful for the future, noting that “The females who train with me are already achieving a good level of competence, and one day they’re going to be successful in competition.”

By tossing an already-proven high-level competitor like Crevar into the mix – particularly given that her youth puts a remarkably high ceiling on her potential – Danaher may just have the opportunity to rectify his so-called failure.