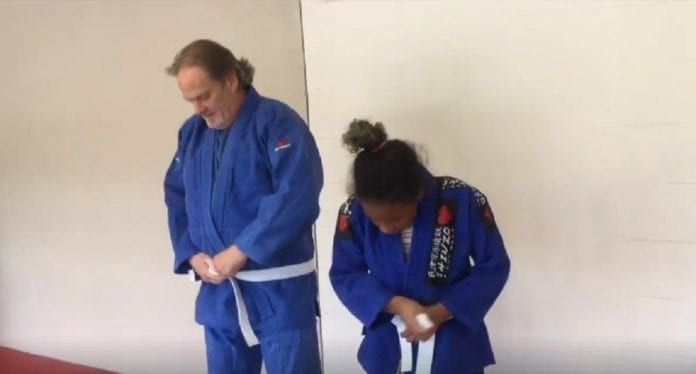 How much time do you think you waste tying and re-tying your belt during class and tournaments?

BJJ purple belt and judo black belt Kathy Hubble has come up with a brilliant solution to that belt that just won’t. stay. tied. Her invention, the Never-Tie Belt, avoids all the loops involved in regularly tying your belt, and even better, it stays put. If that wasn’t enough to convince you that it’s great, Hubble is also donating part of the proceeds to Martial Arts for Justice: a nonprofit that teaches self-defense and works to stop human trafficking in Rwanda.

While purists may scoff at this simplified belt strategy, keep in mind that this could be particularly useful for young kids or jiu-jitsu practitioners with disabilities that make it difficult or impossible to tie a normal belt. And of course, even if you’re an adult without disabilities who just wants a more convenient option for keeping your gi together, this can also be a great alternative.

LONG POST ALERT! MY INVENTION IS FINALLY RELEASED! Some of you know that I’ve been working on an invention/project for like 30 years (well invented it 30 years ago but started seriously working on it for the last five) Finally last year, got it patented and was able to start talking about it… Tested it for past 5 years in Judo, BJJ, Karate, TaeKwonDo, and a few other martial arts…Everybody everywhere urged me to perfect it and go further with it so I finally decided to release it this year (cause it’s kind of an epic birthday year for me.. ahem… 😳and I wanted to do something meaningful for this year…)😍So this is it! THE NEVER-TIE MARTIAL ARTS BELT! My contribution to the martial arts world, I hope it’s helpful to kids, parents, and Instructors out there! I haven’t finished the website fully yet(halfway done) but couldn’t stand waiting anymore to tell people about it! After watching the 59 second video, please let me know your thoughts! Oh and I’m donating part of profits proceeds to an amazing organization that teaches self-defence to Rwanda and helps stop human-trafficking called Martial Arts for Justice. ❤️ Anyway, if you have time, please go to NTB FIGHT GEAR page on Facebook and “Like” it or leave a review. Thank you friends and family! 🙏So excited to be launching soon!