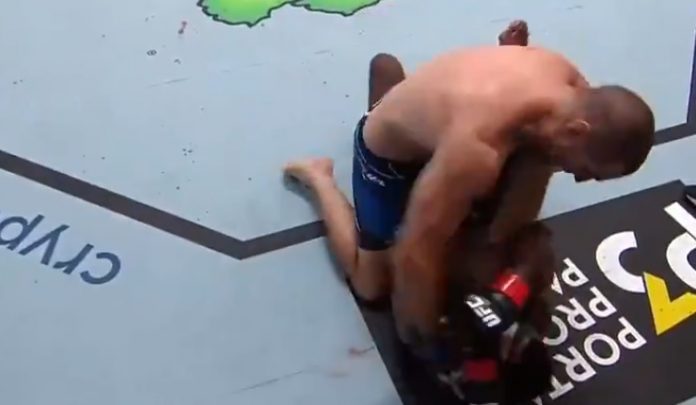 UFC Vegas 33 finished off a night of action-packed fights with a jaw-dropping co-main event that saw Cheyanne Buys finish things off against Gloria de Paula in exactly a minute, and then a main event between Uriah Hall and Sean Strickland that went the distance.Co-Main Event

The athletes went at each other with an exchange of strikes, and Buys brought her opponent to the ground with a trip and ended up in de Paula’s closed guard. De Paula opened her guard, and began to stand up. But in that moment, Buys cracked her across the face with a kick. Buys thought the fight had finished right there, but De Paula kept going and tried to drive forward for a takedown. Buys forced her right back into mount and battered her with fists and elbows, leading the referee to call a stop to the fight at exactly one minute in.

Cheyanne Buys was declared the winner by TKO.

The fighters came out swinging, Strickland driving forward as they exchanged jabs. Hall landed a solid calf kick, but Strickland didn’t slow down, continuing to throw punch after punch at his opponent. The fighters remained consistent throughout the rest of the first round, and Hall picked up the pace in the last ten seconds before the fight moved on to round two.

Round two started with more of the same, with Strickland landing the higher volume of strikes while Hall focused on fewer strikes with more power. Strickland backed Hall against the fence, closing the distance and trying to work his way into the clinch. Though Strickland managed a few short-range strikes, Hall fought his way back into the center and began to press forward. The competitors resumed their back-and-forth exchanges, and the action was briefly paused after an attempted leg kick from Strickland resulted in a kick to Hall’s groin. The action resumed, and as the clock wound down, Hall landed a big jab on Strickland. Strickland came back with a calf kick, and in the final few seconds, Hall came through with a powerful spinning kick, and Strickland tried to counter with a knee before time ran out.

Hall started round three with more aggression, throwing a mix of punches and leg kicks. Hall was consistent with his jab, but Strickland connected with a solid punch and opened the opportunity to take Hall to the ground. Strickland landed a few big hits as Hall defended himself, and Hall eventually got to his feet and used the cage to keep himself on his feet as Strickland worked to take him back to the ground. Strickland got to Hall’s back and brought him to the canvas, using his hand to cover Hall’s airways from top half-guard. Strickland worked to isolate an arm while Hall tried to create space. In the final thirty seconds, Strickland got to Hall’s back and got his hooks in, and Hall managed to survive until the bell.

Hall still pushed forward in round four, throwing a leg kick in the midst of consistent punches. Strickland had slowed down, but was still persistent in his efforts to back Hall up against the fence. Both fighters continued to trade strikes, each putting heavy emphasis on the jab. A hard hit from Strickland staggered Hall, giving him the chance to push Hall against the cage and throw a few knees. Hall punched his way free of Strickland’s control with under 20 seconds left, throwing a few big punches before the end of the round.

Hall came out strong in the fifth round, mixing up quick combos, but Strickland was able to get him against the fence within the first minute and a half. Hall worked his way out, and the fighters traded blows in the center, both visibly fatigued. Strickland again got Hall against the fence and tried to work his way into the clinch. Hall tried to free himself and get back into the center, but Strickland always forced him back, throwing knees with Hall’s back against the cage. Hall got back into the center with under a minute left, swinging big with thirty seconds to go. Strickland drove Hall back against the cage, throwing a spinning elbow and a knee before the final bell went off.

Sean Strickland was declared the winner by unanimous decision.