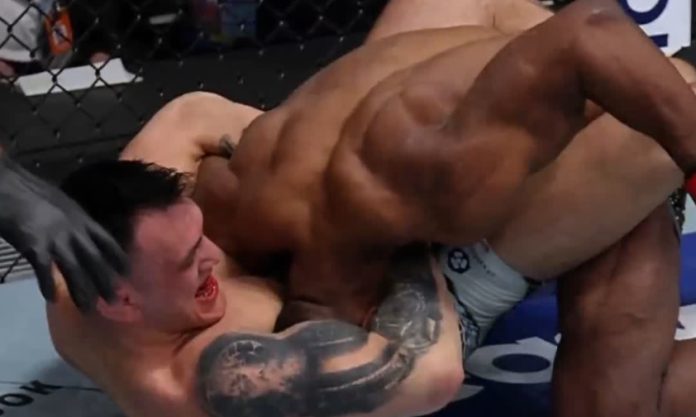 Magomed Ankalaev fought his way to victory in a 5-round battle against KO-artist Thiago Santos during Saturday night’s main event.

It was expected for Ankalaev to grapple early, but he chose to keep it on the feet until late in the fight. With both of the Light Heavyweights on their feet, it seemed as if the fight could end at any moment should one of the strikes find the right home. In the final moments of round 2, Santos landed a shot that dropped Ankalaev, who had been holding a decent lead through the round. However, Ankalaev was able to recover and come back to clearly win the 3rd round. In round 4, we saw Santos slowing down and taking deep breaths, not seeming to do much to hide his fatigue. Ankalaev did just enough to take advantage and win the rest of the fight without putting Santos away.

#6-ranked Ankalaev improves his record to 17-1 and his win streak to 8, while #5-ranked Santos falls to 22-10. We should expect to see the Light Heavyweight rankings change next week.

In the co-main event, Song Yadong defeated veteran Marlon Moraes in the just two minutes into the 1st round, earning himself a performance bonus for the night. Yadong was swinging for the fences out of the gate and landed a vicious combo to put Moraes out for a walk-off KO.

Other bonus earners on the night were  Khalil Rountree Jr. and Azamat Murzakanov who also finished their opponents by KO, and Cody Brundage who submitted his opponent by guillotine in the first round.

Brundage was changing levels early, looking for takedowns as Lungiambula was throwing a lot of power into every shot. Lungiambula was defending takedowns and continuing to throw big strikes, eventually finding his mark and landing a barrage of heavy punches and knees. Out of nowhere, through the chaos, Brundage jumped on Lungiambula’s neck with an arm-in guillotine during a double leg attempt. From there, Brundage jumped guard and they fell to the mat, with Lungiambula tapping in seconds.