Whenever news stories pop up about a woman being attacked by her husband or boss or friend or a stranger, the comments that start popping up often include “Take self-defense classes!”

While well-intentioned, these comments are often vague and under-educated. And while, yes, it is never and should never be a survivor’s responsibility to have to turn into an action hero in order to go about their life safely, many people do want to take their safety into their own hands when it becomes clear that the current state of society isn’t enough to protect them.

Unfortunately, though, when you look up things like “women’s self-defense,” you’ll likely have to sift through a lot of bad advice before you find anything good. And oftentimes, even the “good” is hidden behind marketing tactics that give women unrealistic expectations of the amount of work they’ll need to put in to achieve their goals.

I started training in kickboxing and Brazilian jiu-jitsu about a decade ago after a scary situation of my own made me realize that I was virtually helpless when it came to defending myself against people who would do me harm. While there are other people who are far more qualified than I am to talk about the realities of training with weapons, I want to talk about some of the realities — both good and bad — that many videos and articles about “women’s self-defense” leave out when it comes to martial arts.

One-off women’s self-defense seminars are, in my opinion, one of the biggest scams that exist in the “martial arts” world (that is, if they’re even taught by someone who regularly practices martial arts). It’s not that these seminars never offer good tips, but that many of them don’t emphasize the need to continuously practice the techniques that are taught. Every “women’s self-defense” seminar I’ve been to has taught a few techniques, with each participant getting to practice each move maybe a dozen times before the instructor moved on. While this can be enough to drill the techniques into some participants’ minds, most people won’t remember these techniques for more than a week at most. If you really want to put what you’ve learned into practice in a high-pressure scenario, these moves need to happen without you needing to think about them. You need muscle memory and a strong mind-body connection, and frankly, those aren’t going to develop in a two-hour class.

The exception to this generalization is when the seminar is intended to be an introduction into the school’s actual curriculum, in which case, it will benefit you to ask the coach what the benefits are of the martial art(s) being taught at the academy. Go home and do your own research about the academy itself and the martial arts taught there as well. If you’re simply looking for a fun way to exercise and gain some confidence, the martial arts world is your oyster. But if you’re looking specifically for martial arts that will teach you how to physically defend yourself, you’ll have to be pickier. More on that later, though.

2. You should be prepared to dedicate a lot of your life to training.

If you truly want to learn how to defend yourself using martial arts, taking it up once a week for a couple of months is unlikely to protect you. In fact, doing the bare minimum could do more harm than good, giving you a false sense of security by making you think that you can defend yourself when, really, you aren’t much better off than you were before you started. Getting good at effective martial arts takes years of dedicated training, and even then, you have to make sure that you’re training with self-defense in mind. Doing cardio kickboxing classes with bags and pads won’t prepare you to hit a moving target that’s trying to hit you back. Exclusively taking striking classes, even if sparring is involved, will leave you at a disadvantage if the fight goes to the ground. Exclusively taking Brazilian jiu-jitsu classes will leave you at a disadvantage if you don’t know what to do when your attacker starts punching you while you’re on the ground.

For perspective, it probably took me five or six years of BJJ, training between four and six times a week, before I could confidently handle any new student who walked into the gym, and that’s without strikes and without the added “push” of that new student actively wanting to do me harm. Even now, with nine years of training under my belt, I would always choose to avoid a fight instead of engaging, if possible.

3. The physical component is only half the battle.

While self-defense marketing likes to make women believe that their greatest threat comes from rapists hiding in bushes or serial killers waiting to attack women on their walks home (and, yes, these scenarios absolutely do happen), the numbers show that women are far more likely to be attacked by someone they know. While it’s easy to imagine fighting back against a masked stranger jumping out in the middle of a running trail, the challenge that many women will face is the disbelief that a friend, coworker, significant other, or even teammate could be trying to harm them.

Many women in martial arts (including me) have stories about how, despite knowing how to beat someone up, they found themselves frozen in the moment, questioning or even blaming themselves for what was happening to them and ultimately never using what they learned in their years of training. Women are so often conditioned to put others’ feelings above their own safety that they might politely refuse a date’s advances or endure years of emotional abuse before the experience culminates in a physical altercation.

In other words, physical defense isn’t enough. The mental and emotional preparation takes just as much work and requires tools like a strong support system — such as friends, family, and/or an accredited therapist — and an understanding of the warning signs that can precede physical abuse. The Gift of Fear and Why Does He Do That? are popular books that can help people identify red flags from strangers and partners before they turn into something more dangerous.

“Take martial arts classes” is such a vague piece of advice that many women end up wandering into the first gym that comes up when they search “martial arts near me” and sticking around for years. There are absolutely benefits to learning every type of martial art, from Tai Chi to Tang Soo Do to Muay Thai, but some are better than others for the type of violence that women are most likely to face.

I won’t pretend to know enough about any martial art other than BJJ to tout their benefits or criticize their effectiveness for self-defense, but I am comfortable saying that jiu-jitsu is particularly effective for anyone who wants to learn how to control and immobilize an opponent on the ground. Jiu-jitsu is also extremely beneficial for smaller, weaker people who have to rely on technique to control larger, stronger opponents. There are downfalls, of course, if you only train jiu-jitsu (such as the aforementioned lack of striking), but overall, if you want to learn realistic strategies for protecting yourself on the ground, BJJ is the way to go.

Still, there are plenty of jiu-jitsu gyms that offer unhelpful or even unhealthy environments for their students. I always recommend trying out a few gyms before you commit to one. You can also ask around in BJJ-based social media groups for recommendations for where to train. While it can be hard to judge whether or not a gym has a healthy, supportive environment before you really know what to look for, the number of women training in a gym can be a good indicator of whether or not the academy could provide you with a safe place to train.

If you know someone or are someone who wants to take martial arts for self-defense purposes, make sure you keep your goals and expectations realistic. Learning martial arts like BJJ can help you stay safe, but it takes a lot of work to attain that level of skill… and even then, the safest option is almost always running away.

And, of course, if you have someone in your life that you’re worried about, steer away from victim-blaming. While it’s okay to encourage someone to take up BJJ or weapons training, no one should ever feel like they are the ones at fault if something does happen to them. Self-defense in any form should be a personal choice; our aim as a society should always be to make that choice unnecessary. 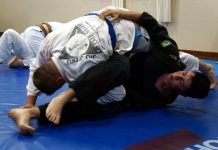 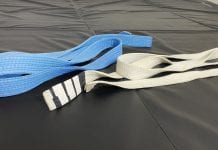 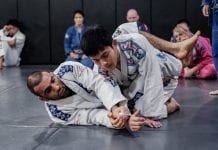 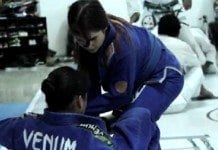