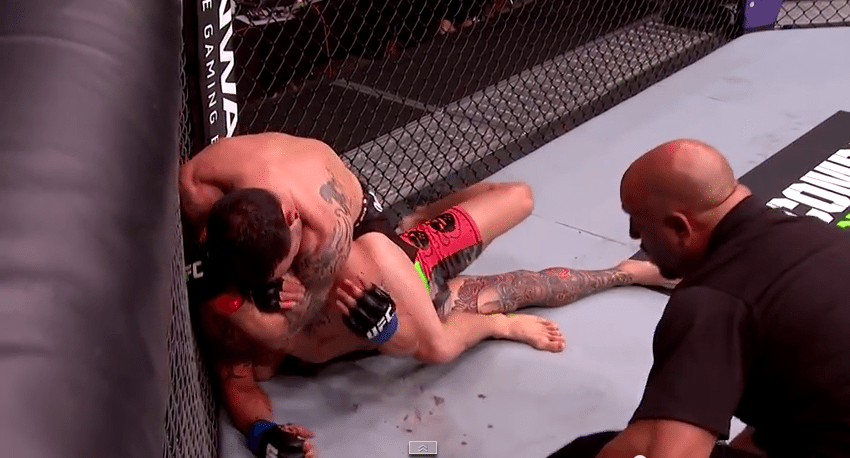 In recent months there have been several articles discussing the role of Brazilian Jiu Jitsu in MMA. Firas Zahabi, the head coach of Georges St. Pierre and Rory MacDonald, raised points about whether training in a gi, the lack of emphasis on takedowns by BJJ competitors, and the IBJJF’s rule sets are barriers to success for high level BJJ competitors trying to make the switch to MMA. He also questioned the athletic abilities of high level BJJ competitors when compared to the level of athleticism exhibited by MMA fighters that come from a wrestling background.

Pedro Olvarria of Fightland also chimed in by noting the high number of male UFC Champions that have college wrestling backgrounds and bringing up the point that the takedowns skills of collegiate wrestlers are more practical in MMA than the pulling guard and playing offense off the back, which has become the overwhelming norm at high level BJJ competitions. Like Zahabi, Olvarria wondered if the IBJJF’s rules were inhibiting the ability of their top competitors to successfully transition to MMA. Olvarria argues that the current rules and point structure of sports BJJ encourages competitors to pull guard and play from the bottom in competition which creates a culture where BJJ competitors spend less time focusing on takedowns. If a BJJ based fighter can’t get a MMA fight to the ground, then his ability to submit is very compromised. One suggestion he brought up was to increase the points awarded for takedowns in BJJ competitions or banning the guard pull.

While both Zahabi and Olvarria bring up points that should be discussed in the BJJ community in regards to the practicality of gi vs nogi training for MMA, the reluctance of BJJ players focusing on takedowns, and whether the rules of sports BJJ are causing its top modern competitors to be less prepared and strategically flawed in MMA, there is no doubt BJJ is still a core and relevant piece of MMA. The sport of MMA is still in its infancy. It was only 20 years ago when the sport was a spectacle to see which martial arts was the best. The boxer or kung fu fighter with no ground fighting skills was very vulnerable to a Jiu Jitsu fighter once the fight hit the canvas.

Today, MMA has evolved to the point where every fighter at the highest levels of the sport is well-rounded in striking, wrestling and BJJ. While Zahabi and Olvarria are quick to point out the number of UFC champions, quality of athletes, and training mentality of MMA fighters from wrestling backgrounds, it must be noted that many of these wrestlers are also ranked BJJ practitioners as well.

I reviewed the UFC rankings for the week of January 19, 2015, and pulled the champion and the top 5 contenders in each of the 10 weight division which equals out to the top 60 fighters in the UFC. Of these top 60 fighters, 45 fighters (75%) have a rank of Blue Belt or above in BJJ. 35 fighters (58%) earned a brown or black belt and 26 fighters (43%) possessed a black belt. To view the data, click here.

Of the top 60 competitors, only 10 (17%) come from a BJJ base. 30 (50%) of the top contenders in the UFC come from a high school or wrestling background. 19 of the 30 (63%) of the wrestlers have achieved a rank of Blue Belt of higher in BJJ. 12 or 40% have achieved Brown or Black Belt with 8 owning a Black Belt. These numbers indicate that wrestling has recently produced more top contenders for the UFC than BJJ, but also highlights that close to two-thirds of contenders in the UFC are formally ranked in BJJ.

Of the 15 of the 60 fighters that have a white belt or no/unknown ranking in BJJ, 3 came from Team Alpha Male (Joseph Benevidaz, TJ DIllashaw, and Chad Mendes) while 3 came from Jackson MMA (Jon Jones, John Dodson, and Donald Cerrone.) While, both teams are MMA focused teams, they still train in NoGi BJJ for MMA.

In modern MMA, all fighters need to train BJJ for both offensive and defensive purposes. Former UFC Champion Matt Hughes owns wins in the UFC over BJJ Black Belts BJ Penn, Renzo Gracie, Ricardo Almeida, and Matt Serra. While he doesn’t have a formal BJJ ranking, Joe Rogan considers his grappling to be Black Belt level and he is facing Renzo Gracie in an ADCC super fight later this year. He has trained for years with grappling specialist Jeremy Horn and BJJ Black Belt Kyle Watson to prepare for the ground attacks of BJJ experts in MMA fights.

In preparation for his rematch with Frank Mir at UFC 100, former NCAA Wrestling Champion Brock Lesnar brought in BJJ World Champion Comprido to work with him on his BJJ in order to learn how to read and defend the submission attacks that Lesnar succumbed to in his first fight against Mir. While Brock’s run in the UFC will be highlighted by his power and ground and pound abilities, he was able to show his BJJ skills by rallying to take down Shane Carwin, pass his guard and apply an arm triangle for a submission victory.

While sports BJJ might not produce the same percentage of great MMA fighters it once did 10 to 15 years ago, the need to train BJJ as part of MMA training is still an integral part of reaching the highest levels of the UFC. All fighters regardless of their original martial arts base have incorporated BJJ, submission grappling and its defenses into their MMA play books. Guard retention, arm bars, chokes, guard passing, clinching, and posturing are all from BJJ. To say that BJJ is no longer relevant or is negated by wrestling would be short sighted. The reality is many top UFC Champions and contenders have trained in BJJ both formally and informally to the point where their BJJ defensive skills can counter many submission attempts. Firas Zahabi’s might have a strong point when he made this statement.

“Wrestlers are learning jiu-jitsu, and jiu-jitsu guys aren’t so open-minded to the wrestling. They don’t understand that wrestling is as technical as jiu-jitsu. It’s jiu-jitsu standing up, why are you not in love with it? Why doesn’t it fascinate you?”