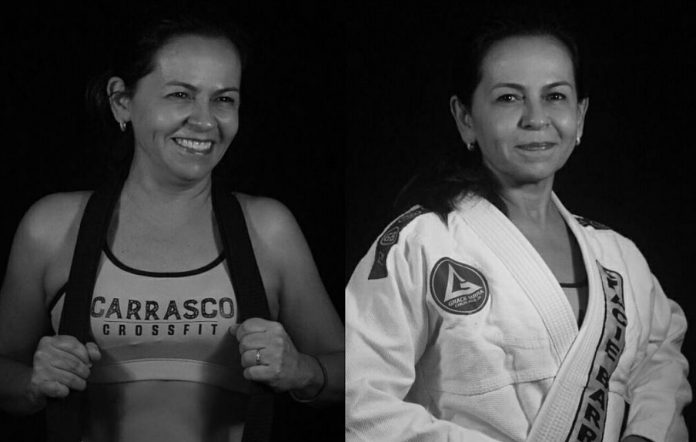 Yvone Magalhães Duarte is a woman who should need no introduction. One of the earliest documented pioneers in women’s jiu-jitsu according to an extensive research project by BJJ Heroes, Duarte is not only Brazilian jiu-jitsu’s first female black belt – as of 2021, she’s also the sport’s first female coral belt. This week, the Jiu-Jitsu Times was granted the tremendous opportunity to chat with Duarte about her iconic career on and off the mats.

Please note that the following interview has been edited for length and clarity.

Jiu-Jitsu Times: Let’s start with your early days in martial arts. You began training jiu-jitsu in the late 70s and early 80s when very few women were on the mats, and before many people outside of Brazil had even heard of Brazilian jiu-jitsu. What was the first thing that appealed to you about the art, and did that change all over time?

Yvone Duarte: The movement of the bodies, the plasticity of the fight, caught my attention. The first time I saw jiu-jitsu was during a championship. On the tatami, Sergio Penha and Rickson Gracie were fighting. I saw how the possibility of winning or losing was intrinsically linked, and that both the near-victory and the near-defeat could be reversed in seconds.

The concentration of the athletes caught my attention, [their] look transforming during combat, subtracting something human and emerging [as] something transcendental.  At the same time, [I saw] what is all too human coming to the surface: exhaustion, fear, strength, sweat – and on the other side, the resistance, the overcoming, the patience of the samurai trying to transcend.

Throughout my practice, I was trying to understand what that movement represented, that chessboard being played with bodies commanded by intelligence, emotional control, skills, and the fighting spirit of each player. I was [incorporating] the values and principles, improving techniques, and many of my first impressions naturally changed.

The power of jiu-jitsu lies strictly in the daily practice, in seeing your limits, possibilities, and abilities, in an intense and laborious process that can improve your emotional structure and allow you to change paradigms, which will certainly lead to good results for all dimensions of life.

JJT: According to BJJ Heroes, in addition to being Brazilian jiu-jitsu’s very first female coral belt, you were also the sport’s first female black belt – promoted to the rank in 1990, well before most women even involved themselves regularly in jiu-jitsu, much less advanced through the higher ranks. Were you determined from the start of your jiu-jitsu career to achieve such heights? What motivated you?

Duarte: When I was a child, I practiced other sports. I already competed and liked challenges. In jiu-jitsu, after some time of training, I wanted to experience the efficiency of fighting. I didn’t think I would win the first championship; I was still stuck to the paradigm of “the strongest, the biggest, and the heaviest win the fights,” the street fights. It was necessary to experience [fighting] in order to convince myself, in practice, that jiu-jitsu has indeed transformed this maxim forever.

JJT: Your brother is a fellow coral belt, Pascoal Duarte. How did he feel about his sister getting involved in jiu-jitsu? Did he encourage you?

Duarte: My brother, Pascoal Duarte, introduced me to jiu-jitsu, and was always by my side in fights, in the gym, in life. He was the one who deciphered jiu-jitsu for me, and showed me how jiu-jitsu transforms us from the inside, giving us other psychosocial abilities.

My brother would prepare my afternoon vitamin; he would take me to the beach, to shows, to the most incredible outings in Rio de Janeiro. I always felt safe walking in Rio. I developed this feeling of security from his care: from the self-defense tips that he gave me, from the idea he already had that a woman needs – and can have – autonomy.

JJT: Did your teacher, Master Osvaldo Alves, ever offer you any particularly memorable advice as you advanced through your jiu-jitsu career?

Duarte: Osvaldo Alves, my master, was always a great motivator. He liked to see the lighter and smaller athletes winning the internal challenges in the academy […] His advice had two fundamental points: do not get complacent; do not play to win, play to finish.

JJT: As early as the 1980s, you were already campaigning for women to compete in jiu-jitsu tournaments. Do you remember what your first tournament was like, or who your toughest matches were?

Duarte:  I prepared for the first women’s tournament in the city of Rio de Janeiro, which was the epicenter of [Brazilian jiu-jitsu]. With daily classes of 3 to 4 hours, it was very exhausting. I did 3 fights in my 52kg weight class and then I fought the absolute.

Note from JJT: Here, Duarte includes a quote from her brother, coral belt master Pascoal Duarte, who recalls the following memory regarding his sister’s first tournament:

“The first time I saw Yvone competing was in Ipanema, Rio de Janeiro, in an all-female championship. I had followed her in training and knew that she was well prepared technically and physically. Moments before the first fight, I was by her side. She was accepted in her category and in the absolute category. She was wearing a kimono, just waiting to be called, and I was looking around for the opponents. I felt as nervous, if not more nervous than if I was going to fight myself.

“When I found the opponents, I soon realized that they were bigger and stronger than Yvone.

I did not say anything to her, but she read my mind. She looked at me and said one of the phrases we learned on the streets of Boa Vista, our childhood town:

‘Brother, that is… only big enough. You will see!’

“In the first fight Yvone finished her opponent in less than three minutes, starting a historical trajectory, fighting in the weight and absolute, and becoming an undefeated champion for two decades, in the ’80s and ’90s.”

JJT: What was it like starting your own jiu-jitsu team? What were the greatest challenges and the greatest rewards?

Duarte: Life kept giving me opportunities to train, fight in championships, and advance in belt rankings, and consequently the time [came for me to pass on] some of the knowledge I had accumulated. When I moved from Rio de Janeiro to Brasília, I received invitations to teach at the Police Academy and at four other academies in the city. After I was promoted to black belt, I created my own team. Today I have students giving classes and who continue to practice good jiu-jitsu.

JJT: Between being both Brazilian jiu-jitsu’s first female black belt and its first female coral belt, you’re a true pioneer for women in the art. Do you have a particular accomplishment you look back on as your greatest achievement in jiu-jitsu?

Duarte: I consider it important to have been able to [set forth] the first jiu-jitsu championships, having managed to overcome the barrier of placing women’s divisions in the state and national championships in 1985. I didn’t do it alone; my friends […] such as Marina Alcântara, Jeane Xaud, Laila Zalfa, Fernanda Bulhões, Ana Maria D’Ávila are also responsible for this achievement. They were also the ones who fought in the first championship at Tijuca Tennis Club. I prepared myself, but my son was born before [I could fight], and I was replaced by my cousin, also from the team, who had an excellent fight and finished her opponent.

Another issue that brings me a mix of concern and satisfaction is the link I have been trying to build between self-defense and fighting violence against women and the LGBTQ+ community. I find it satisfying to have created classes in public universities so that low-income people who are threatened by – or victims of – violence can practice jiu-jitsu, especially self-defense. In addition to the National University of Brasilia and the Federal University of Roraima, I have sought to expand this project, and right now I am [discussing the project] with the Federal University of Bahia.

I am concerned about the very high rates of violence against women and [the LGBTQ+ community] in Brazil. So we can’t be complacent; we have to insert jiu-jitsu in a wide network of protection to these [communities]. We will not solve the problem alone, without public policies, but jiu-jitsu needs to call itself to this challenge, which belongs to all practitioners of any martial art. And fighting against cowards, aggressors, abusers, and rapists is a great battle!

JJT: Are there any passions and interests outside of jiu-jitsu you’re engaged in now that you’d like to share with us?

Duarte: I am a woman in love with life. I love spending time in the Amazon region, more specifically in the streams and rivers of my childhood, the Caracaranã Lake and the Cotingo River. I miss my backyard, the backyard of my godmother Yeda, worlds shared with my cousins Hadime, Jeane, and Haron Xaud.

I have a passion for samba, maracatu, xote, the pandeiro, the atabaques, the moonlit violas, Brazilian popular music, the poetry of Manoel de Barros and Carlos Drummond de Andrade; I have a passion for the Chapada dos Veadeiros, where I met the love of my life; I have passion for my country of the river, beach, Amazon, [and] this country of ethnic [and] cultural diversity. Do you know it? Come and get to know it!

You can find out more about Yvone Duarte’s ongoing projects, passions, and accomplishments on Instagram.