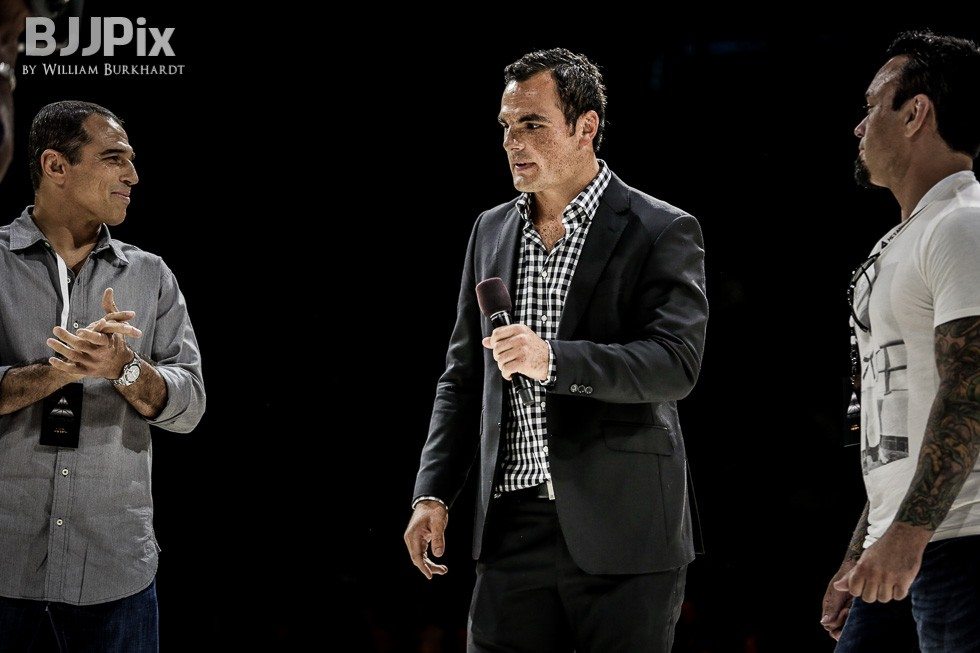 Metamoris 5’s main event featuring a rematch between Renzo Gracie and Kazushi Sakuraba is a return to the formula that raised Metamoris 3 to a whole new level when it featured the long anticipated rematch between Royler Gracie and Eddie Bravo. The formula of using Metamoris as a platform to resolve unfinished business between adversaries from Jiu Jitsu and Mixed Martial Arts has helped increase the media coverage for the event and brought in new audiences from both the BJJ and MMA communities.

As Metamoris continues to grow, here are 5 match ups for the event that would excite Jiu Jitsu and Mixed Martial Arts fans.

Their post TUF: Brazil fight was permanently cancelled after Wanderlei avoided a drug test and Chael tested positive for PEDs this past Spring. Since the fall out, the Nevada State Athletic Commission punished Chael with a 2-year suspension and sentenced Wanderlei to a lifetime suspension from MMA competition.

Since then, there has been speculation and rumors that the two might still fight in a MMA fight in Brazil or Japan, since both countries are out of the reach of the NSAC’s sphere of influence. Chael has teased the possibility of the two meeting in a grappling match at a future Metamoris event, but that can be dicey as well, considering the NSAC’s issues with Chael competing against Andre Galvao at Metamoris 4. This is not a feud that will die off unsettled. Eventually, these two bitter rivals will meet up in the cage, ring, or mat to settle the score.

The rivalry dates back to Chael’s derogatory comments about Brazil to hype his first match with Anderson Silva at UFC 117 in August 2010. Several months after the match, Wanderlei and Chael shared an awkward limousine ride where Wanderlei subtly threatened Chael.

A month later, during a Health and Fitness Expo in Las Vegas this went down.

UFC President Dana White saw gold in this feud and casted Chael and Wanderlei as the coaches for TUF: Brazil. The tension between the two culminated in this on-air confrontation.

After Eddie Bravo’s 20-minute draw with Royler Gracie at Metamoris 3, there was a backstage confrontation between the Master of the Rubber Guard and Royler’s brother, UFC legend Royce Gracie. The two exchanged words and each have told their own versions of what happened that night.

Royce has expressed interest in fighting Eddie in a MMA fight, but that seems unlikely since Eddie has never fought in a MMA fight before. Eddie has proven to be a major draw for Metamoris and a match against the original king of the UFC would draw major interest from both the BJJ and MMA fans.

Wallid Ismail has been a thorn in the side of the Gracies for over two decades. The Carlson Gracie protégé has defeated brothers Ryan and Renzo Gracie in Jiu Jitsu competitions as well as choking their cousin Royce unconscious in a highly publicized Jiu Jitsu match.

The late Ryan and Wallid were scheduled to fight in MMA several times, but those fights fell through.  The two men also had several run-ins as well, including a run-in on Pepe Beach.

In September 2010, Middleeasy.com presented Renzo Gracie with a t-shirt that featured a paragraph long rant by Wallid about Ryan. Renzo patiently read the t-shirt and then told a story about Ryan and Wallid.

This match up would be very personal for both Wallid and Renzo and the prefight verbal sparring and posturing would be more personal and less respectful then the pre-fight build up for the Renzo vs Sakuraba rematch.

Matt Hughes could be called the ‘Renzo Gracie Team Killer.’ Over the years, Hughes has defeated Renzo Gracie Team members Renzo Gracie, Matt Serra, Ricardo Almeida, and Georges St. Pierre in both MMA and grappling bouts. Hughes and Renzo will be renewing the rivalry for an ADCC super fight in 2015. However, the bitterest rivalry is between Hughes and Matt Serra. The two former UFC Welterweight Champions did not hit it off when they met on the fourth season of The Ultimate Fighter where Hughes was a coach and Serra was a contestant. Hughes thought Serra was a brash and cocky New Yorker that cursed too much while Serra felt Hughes was a bully and a prick.

After Serra upset Georges St. Pierre to win the UFC belt, Serra and Hughes’ rivalry escalated when they were chosen to coach against each other for the 6th season of TUF. The back and forth between the two rivals continued on the show and the feud was scheduled to be settled at UFC 79 on December 2007, but Serra pulled out due to a back injury. The match finally took place in May 2009 with Hughes beating Serra 2 rounds to 1 on the judges’ score cards.

The beef was temporally squashed after the fight and Serra was complimentary of Hughes when he appeared on the special Matt Hughes DVD produced by the UFC. However, Serra’s attitude changed when he heard what Hughes had to say about him on the DVD.

Since that time, both men have since retired from MMA, but have indicated a mutual interest in fighting each other again. In February 2014, they engaged in some Twitter banter where they both were willing to come back and fight in a MMA fight. With Hughes ready to return to the grappling scene with his super fight against Renzo Gracie, maybe Hughes and Serra would be willing to engage in a grappling bout instead of a MMA bout.

Ralph Gracie has been known as one of the more intense members of the Gracie family. He has groomed and developed many great BJJ competitors including Dave Camarillo and Kurt Osiander. However, his greatest pupil was BJJ and UFC World Champion BJ Penn. Penn moved to the Bay Area as a teenager to train full-time with Ralph and was promoted by Ralph to Purple Belt after training him for 2 years and 2months.

BJ then left the team to train with Nova Uniao in Brazil where he received his Black Belt after training for 3 years and 4 months from Andre Pederneiras. Ralph took BJ’s departure personally as shown from this scene in the documentary Legacy.

A matchup between the teacher and his one-time student would be a very easy storyline to sell to the BJJ and MMA fans. BJ Penn has teased a potential return to the grappling scene since retiring from the UFC.  The animosity in the feud is more from Ralph than BJ, but it would still be very intriguing to see how this match would go down at Metamoris.