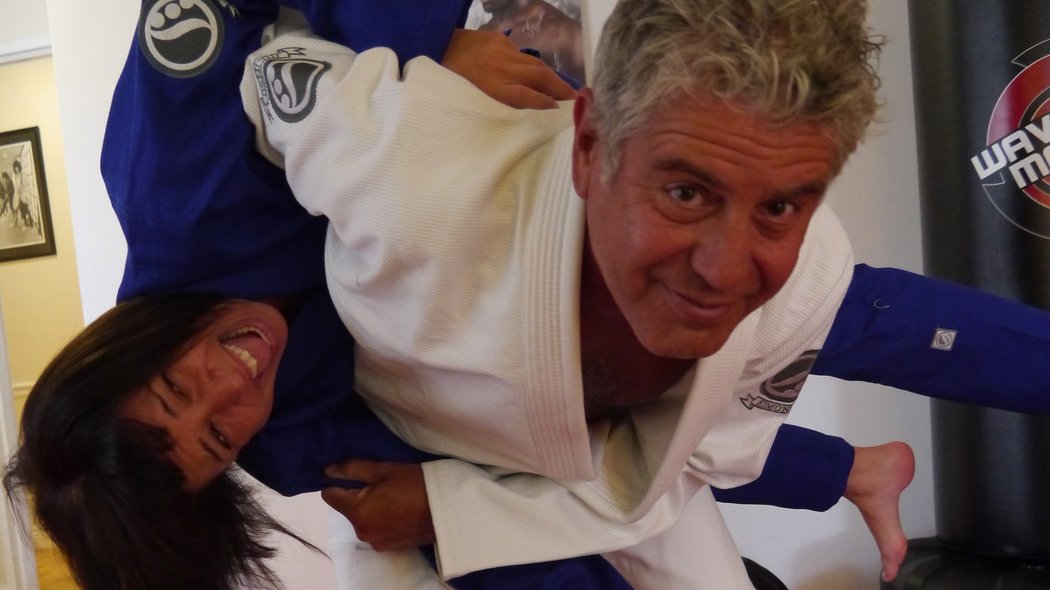 Anthony Bourdain is a well known American chef, author, and popular television personality. He is known for his publications and for hosting a travel

television series, where he wanders the world, experiencing different meals in a variety of different cities and towns. The chef’s wife is an active and well known blue belt competitor in BJJ. In the past year, she was able to convince her husband to begin training at the Renzo Gracie academy for BJJ in New York. In a recent interview, the culinary personality revealed that he was very happy to have started training under the martial style.

Recently, the chef has gone so far as to take a helicopter to beat the traffic in order to make it to his BJJ practice on time. The chef replied that if he had been asked several years ago to engage in the training exercise, he would have responded negatively. Now, however, he is addicted to his training routine, and he feels as though he is able to perform better after the makes it through the day with his training session. He has admitted to be willing to take extra steps to make sure that he is on top of his training, whether in regular classes or in private sessions.

While he is still only a white belt, he has been training regularly in order to be able to learn more about the martial art and its fitness goals. He has incorporated the practice into his regular schedule so that he can enjoy a variety of fulfilling hobbies and activities. He has gone as far as to simply state “I love it” whenever he is asked about his training and why he has taken so quickly to the style.

He believes that when he goes to the gym, he is immediately faced with a series of problems that he believes he will not be able to solve on his own. With gym activities, he will have a goal in mind and he will pursue it to the best of his abilities within the context of the exercises that he is performing. With the pursuit of BJJ, however, he believes that progress is gradual and visible on a much more personal level, which removes a lot of the confusion that comes from training alone. He is able to plan ahead for weeks and enjoy the comfort of the training itself without any distractions.

He has said that while he has had a difficult time in the beginning, BJJ has quickly become one of the main passions in his life. With the first few classes and warm ups, he found it very difficult to get used to the training. However, as he began to become more and more accustomed to the rigorous routines, he has been able to enjoy the classes even more. He finds that many of the instructions are instinctive and that the style itself is very stimulating and refreshing, to the point where he encouraged others to try it.