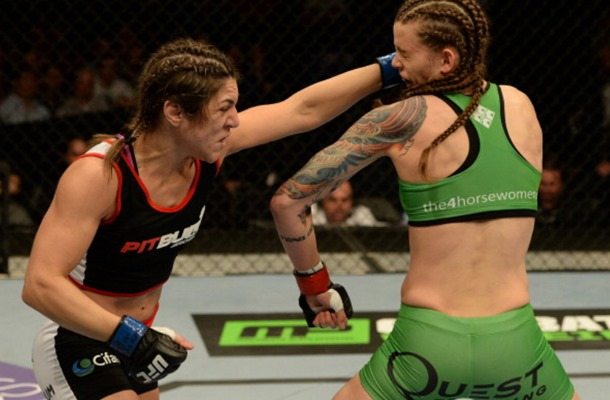 I’m really happy with my win and my performance. I pleased the crowd, and that’s what matters to me,” Correia told MMAFighting.com after her win over Baszler at UFC 177 in Sacramento. “It was an exciting fight. I also pleased Dana White, he praised my performance, so I completed my mission. I wanted the knockout.

I knew she would try to grapple with me, and she made it pretty clear in the beginning of the fight,” she said. “I didn’t do well in the beginning, and played her game, but I stayed calm and did what I do best in the second round: trade punches.

I needed this. I knew people would look at me as a great fighter with that. I needed this to get where I want, to get to the title. I’m confident. I’m ready to fight for the title. People see me with different eyes today, they see me as a top fighter today.

I don’t know what Dana White’s plans are, but I respect his decision. He knows what he has to do. But the only thing I can say is I want to be the champion so bad,

I know I would give Ronda a great fight. I’m capable of beating Ronda. I know that.

I’m one of the first women to sign with the UFC, I’m undefeated, and I have the right to ask for this opportunity,” she continued. “I want the title fight. I challenge Ronda Rousey to end my invincibility, because she won’t. I’m the one who will retire as the undefeated UFC champion. My dream is to fight for the title. I want to show the whole world that I’m the UFC champion