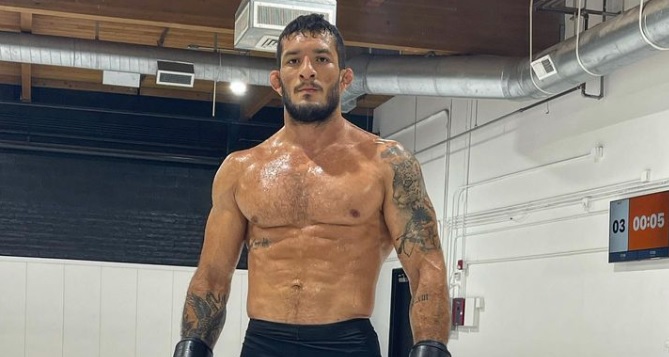 “The Hulk” has long been a mainstay of the elite submission grappling scene. Coming off a competitive silver medal finish against new champ Giancarlo Bodoni at the talent-stacked ADCC 2022 World Championships, Lucas Barbosa now sets his sights on a fresh goal: an MMA victory against Itso Babulaidze on Friday, January 27, as part of the PFL’s Challenger Series.

“I’m excited – of course, my background is in jiu-jitsu, but I’m pretty confident in my hands too,” Barbosa tells the Jiu-Jitsu Times. He also believes that his aggressive, top-heavy style of submission grappling will translate well to the cage. “I think my [jiu-jitsu] style is very aggressive, and I fight until the end, that’s the thing,” he explains. “Even if I’m on bottom, I’m always bringing the heart, bringing the fire, to the fight.”

Barbosa was actually scheduled for an earlier fight, but suffered a last minute disappointment when his opponent had to pull out due to food poisoning. “The fight didn’t happen, a lot of fans got upset because they were waiting, and they really expected me to fight – but now I have an opportunity to get out there again, and show what I’m actually excited to do.”

He’s keen to face Babulaidze in his upcoming fight, particularly since Hulk has observed a similar streak of aggression in the other fighter. “My opponent pretty much has the same style [I do] – so I believe that we’ll bring a really good show to the people.”

While Babulaidze is more of a striker than a grappler, according to Hulk, the ADCC veteran maintains a healthy respect for his opponent’s seemingly very well-rounded abilities. “I saw that he took his last opponent down, and was trying to wrestle, so it was pretty back-and-forth, and he wound up knocking the guy out – so I think he’s both [a good striker and a good grappler].”

That said, Barbosa, of course, remains confident that his own grappling level far outstrips that of Babulaidze. “My jiu-jitsu level, my ground level, is way better than his, of course – so I’m confident there.”

A great deal of Barbosa’s current fighting mindset was forged in the fire of ADCC 2022, notoriously one of the biggest submission grappling events the jiu-jitsu world has seen to date. “Last year was focused on doing a lot of MMA and no-gi jiu-jitsu – and I had to turn down a couple fights because I was injured – but by the end of the year, I started feeling better, so I started sharpening my technique.”

“In the [ADCC] finals, what happened was that I just made a mistake,” he confesses. “But it was fun. And [Bodoni] did pretty well. We’ve faced each other before.” Which is one of the things that the Hulk loves about the sport – in his opinion, facing the same rivals over and over again at the highest levels of jiu-jitsu fosters growth for both athletes. “I definitely leveled up [Bodoni] – he had to learn and improve in some areas [from our last match], and when he got to [ADCC] finals, he definitely had a good strategy.”

The fact that Barbosa’s team Atos has traditionally refused closeouts between teammates adds an extra edge to training when Atos athletes enter the same bracket at big tournaments. To that end, how did it feel for the Hulk to share an ADCC division with not one, but two teammates, in Josh Hinger and Tye Ruotolo?

“That was actually the first time I fought a teammate for real,” says Barbosa. “I don’t like close-outs because believe it or not, it’s not really healthy for the environment. I learned a lot from Josh Hinger and Tye Ruotolo, and when it [came time for] competition, everyone kind of had to do their own thing, but we’re still friends, we still train with each other. It’s a little bit awkward, but afterwards, we know that there’s only one winner, and we’ve got to go out there. Everyone wants the same thing.

“I’m glad that we didn’t have any arguments or difficulties – you know, we’re still teammates. The environment changes in the moment [of the match], but everything’s fine now.” He laughs. “And you only have to deal with it every two years! But to grow the sport, as it evolves, this is going to happen more and more often. It would be cool if we [as teammates] can avoid each other, but if it happens, it happens.”

However, training with Atos’ two-sport athletes, like ADCC champion turned aspiring MMA fighter Kade Ruotolo – not to mention their professor, André Galvão himself, a multi-promotion MMA veteran – gave Barbosa a unique way to balance MMA training with his jiu-jitsu career.

“Our number one skill is going to be on the ground – of course, you have to complete, with striking, grappling, and wrestling – but the problem with most guys who start making the transition to MMA is that they start losing their jiu-jitsu skills,” the Hulk elaborates. “They start training with MMA fighters – who are really tough from MMA, but they don’t have the same skills as a jiu-jitsu competitor.

“So if you keep your skills sharp with guys [like Kade and André] – and at the same time, you’re training MMA with them – you’re not going to lose your jiu-jitsu skills. You’re going to keep improving.”

How does Barbosa feel about taking that training into the PFL cage? “I’m looking forward to testing myself,” says the Hulk. “I’m looking for the finish somehow, whether it’s with a knockout or a submission. I’m excited, and I can’t wait for January 27.”