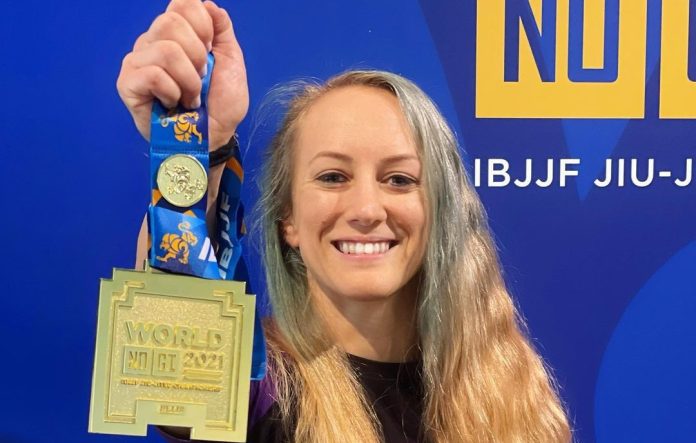 Lauren Sears didn’t step foot on a jiu-jitsu mat until the age of 27 – a comparatively late start for the current standards of the sport – but it didn’t take the 10th Planet star long to start giving younger athletes an intimidating run for their money. Now 32, Sears currently owns an IBJJF adult no-gi purple belt world title, a silver medal at adult brown belt in no-gi, and multiple superfight victories, including a Fight 2 Win championship.

“I think one of the things that particularly has helped me is that I’ve always been an athlete of some sort,” Sears tells the Jiu-Jitsu Times. “I trained professionally in triathlon, and I competed in that. I was a personal trainer for eight years, and I’m now a physical therapist assistant, so I understand the human body, and movement, and how to program and strategize and train my body, and how I best learn. So I think that those things really helped me with moving forward in jiu-jitsu.”

What’s particularly impressive about her IBJJF run is that Sears won her first adult world title in her first ever IBJJF tournament, in the purple belt division – and took home every victory at that tournament by submission. “Last year, going into Worlds as my first IBJJF tournament, I was just really excited,” says Sears. “I’d competed in some higher-level circuits under other rulesets like WNO and Finishers, so I was confident that I had the skill set to compete at that level, especially since I’d competed against higher belts in some of these other circuits.”

“I was excited to get out there and showcase my skills, and the preparation for it was pretty awesome – because I’d never competed in a ruleset where I had to focus on points,” she reveals. “So the months leading up to Worlds, my whole focus was on passing, sweeping, and solidifying positions – and learning the ruleset, and having all my rolls focused on that ruleset. So rather than going in and rolling a typical roll, every roll was about keeping track of the points.”

“I was studying the rules, even little intricacies like dealing with double pulls – all these little things that I think are really important to understand,” adds Sears. “So much of competition goes beyond just pure jiu-jitsu and athleticism – a huge part of it is also strategy.”

All that homework paid off when she took home gold in the division. Moreover, Sears continued to impress at brown belt this past year, earning a silver medal finish on the podium despite having to rehab a major knee injury prior to her most recent no-gi Worlds run.

“Thankfully, this time around, it was a lot easier than my experiences in the past – I’ve had a lot of different injuries over the course of my life, even before jiu-jitsu,” she reflects. “But it was easier this time around, particularly because I have a team of physical therapists and trainers who are supporting me now.”

“I’ve gotten a lot better at managing myself mentally,” she adds. Previously, she struggled with depression during time off from training, and even after healing, continued to deal with newfound fears specific to re-injuring herself.

However, those experiences have equipped her with a hard-won understanding of how to improve her own mental state. “What I did was, I went to physical therapy two to three times a week, which of course helped expedite the healing process, but it was also good for my mental state, because I was doing something to help bring myself back.”

Instead of seeing the layoff period as something that would hold her back physically, she chose to reframe it in her mind as an opportunity not only to strengthen the injured knee, but also to strengthen other parts of her body – parts that might normally be neglected due to a demanding training schedule. She also took a far more active coaching role in classes, which allowed her to continue progressing, even without direct mat time.

While Sears’ path to excellence hasn’t always been easy, a major key to her success is effective time management – and career prioritization. “I work part-time in physical therapy, and what makes it really doable for me is that I get to set my own schedule,” explains Sears. “I think it would be really difficult to work for somebody, and maintain the amount of training that I do.

“I do work for a company, but I get to set my own schedule, and I work in home health. I’m a home health physical therapist working specifically with kids – so it’s special needs kids, or kids with conditions that are lifelong. I see them, and I do therapy that’s basically going to make their day-to-day life easier. Maybe whatever’s going on can’t be cured, but it can be improved, and their quality of life can be improved.

“So since it’s home health, I schedule out with my patients, and I have a limited number of patients that I see. I currently have about ten patients, so that’s twenty sessions a week, and about twenty hours a week, give or take.”

As for her training schedule outside of work, Sears makes sure to do strength and conditioning three to four times a week. Two of those sessions are typically done with her performance coach; the other two, she handles on her own. She reserves the earlier half of her mornings for strength work, before she starts diving into mat time around 11 AM onwards. She’ll usually see a couple of patients in the afternoon or evening, before heading back to the gym to either train or coach during PM hours.

What advice does she have for other athletes over thirty who still want to chase professional grappling dreams?

“For athletes who are still looking to compete after their thirties, I think there are a few things that are pretty important to sustain longevity, and compete at these higher levels” says Sears. “For me, recovery is key. And recovery can be as simple as getting eight hours or more of sleep at night. I notice a big difference if I don’t get more than eight hours of sleep. Hydration, nutrition, and then mobility and stability – joint strengthening and stabilization, especially – I think that those things are really important.”

She also places tremendous emphasis on choosing rolling partners wisely. “The way I decide who I’m going to roll with is based on size, skill, and style. I choose – typically – not to roll with anyone who’s over 160 pounds, unless they’re a coach, or a close friend that I know really well and can trust to be technical, since I walk around at 115.

“I’ve been injured a lot in the past, so I’ve learned that for me – especially with my size – it’s really important for me to train with people who are not significantly heavier than me. Not only because the risk of injury goes up training with someone way bigger, but also because of the wear and tear that happens over time. So, having to deal with that extra weight on a regular basis at higher intensity levels, especially, is going to put a lot of strain on the body that’s kind of unnecessary. It takes a lot more time to heal and recover from that.”

Mindset has also been huge for Sears. A fan recently asked the 10th Planet star for her thoughts on turning pro in jiu-jitsu later in life.

Sears wrote back the following, which she also shared with the Jiu-Jitsu Times: “I think so many [of] us hold back on the potential of our lives because of the self limiting beliefs that tell us we’re too old, too inexperienced, too late, not fit enough, life is too busy, too this or that, the list goes on. Self limiting beliefs and fear of failure are the number one killer of dreams.

“Push all of that aside. Rather than focusing on why it may not work, focus on curiosity for what you will get to experience and learn no matter the outcome or how far you may go. It’s not our place to decide if a moment belongs to us or the person on the other side of the mat. You both deserve and are capable of winning moments. Understanding this helps me believe in myself but also not be so hard on myself and feel happy for my opponent when I don’t get my hand [raised]. Don’t ever count out or discredit yourself.”

As for her own professional goals, Sears shows no signs of slowing down. With the ongoing growth of the ADCC circuit, Sears is looking toward a potential ADCC run, particularly if lighter weight divisions open up for female competitors. She’d also love to gun for IBJJF world titles at brown and black belt.

“A lot of my purpose behind all this is yes, I love to push myself and challenge myself; I’ve always been an athlete,” she acknowledges. “There’s so much about it that I love, the interactions that I get to have with people, the traveling. I feel like I learn the most about myself and my jiu-jitsu from competing, and the data I collect there.”

Catch Lauren Sears in action next on February 11 at the Midwest Finishers 12 team event.

She’ll also be competing in the 115-pound bracket on February 25 at Submissions on the Shore.