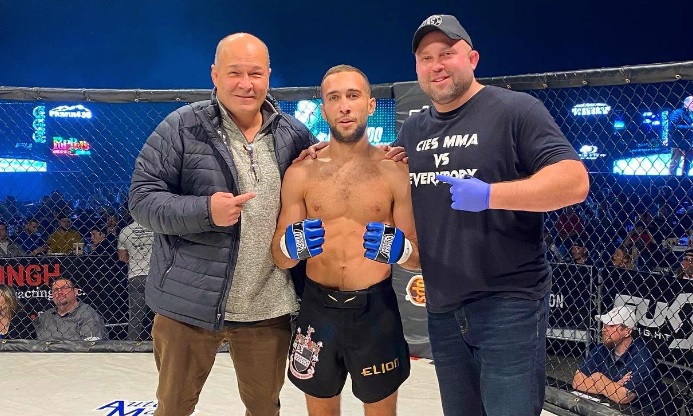 When Eduardo Penha first got his start in combat sports, he was better-known as the youngest son of the great Sergio Penha – the guy who, in his prime, nearly defeated the seemingly invincible Rickson Gracie – than as his own man.

Once upon a time, that used to bother Eduardo, who as a young boy, felt immense pressure to live up to his father’s legacy. “In the beginning, as a kid, you put stupid stuff in your head,” Eduardo tells me. “You overthink everything. Things that don’t matter matter to you. So definitely, when I was a kid, I put added pressure on myself. Just completely unnecessary pressure.

“As I’ve grown older, though, all those little things I used to put into my head, I realized that none of it really matters. My dad had his own legacy, and his own footsteps, and I have mine. If people pay a little more attention to me because of him, awesome. If they don’t, awesome.”

He smiles. “But at the end of the day, really, if I win or lose, they might talk about it for a day, but the sun’s still going to come up tomorrow, and it’s really not that big of a deal.”

The youngest of Sergio Penha’s three children, Eduardo is also the only one of his siblings who picked the path of a professional fighter and combat sports athlete – and he’s made it look shockingly easy so far. A two-time All-American wrestler with jiu-jitsu chops for days, Eduardo is still a relative rookie in the world of MMA, but he’s already built a reputation for finishing opponents in brutally efficient and dominant fashion.

However, according to Eduardo, Sergio never pressured any of his children to chase martial arts accolades.

“My dad put zero pressure on me when I was growing up, to be honest,” Eduardo reveals. “He wanted [me and my siblings] to learn jiu-jitsu to defend ourselves, and for recreational purposes. It was for the same reasons everyone wants their kids to do martial arts — for the discipline, and the respect, and especially to be able to defend ourselves: that was the big thing. And I think that as soon as we got that, he was satisfied. He never pressured me to go to the gym, not once. He was really laid back about it.”

Eduardo himself, though, is the very picture of self-discipline. Currently, he’s hard at work preparing to put on a show at LFA 148 – where he’ll be fighting Joseph Dorado this Friday, December 9. Penha versus Dorado marks the second professional fight of Eduardo’s career.

“I definitely want to end the fight as early as possible every time I’m in there,” says Eduardo. “Don’t want to stick around too long, and leave possibilities for things to go unplanned.”

True to his strategy, Eduardo has yet to face an opponent he hasn’t been able to knock out or submit in the first round. It’s also arguably why he’s been able to make the jump so quickly from the amateur scene to the pro leagues – not many amateur fighters are keen to take on an All-American wrestler with Eduardo’s jiu-jitsu pedigree.

“I definitely wanted to stay active – that was my big thing,” explains Eduardo. “And it was harder and harder to stay active and get fights as an amateur […] so we thought, ‘Why don’t we just jump into pros and see how it goes?’”

He laughs. “I think you’re almost punished for doing the right thing – [and I was] doing the right thing growing up as a kid, as a teenager, and a young adult, wrestling, doing my jiu-jitsu, working on my striking – but that only makes it harder and harder to find fights early in your career. I think later in your career, maybe it doesn’t matter as much, but definitely early on.”

Strong wrestling foundations were an attribute that Eduardo’s father encouraged him to cultivate as a teen. “I started wrestling my sophomore year of high school,” Eduardo remembers. “And my dad always told me it would be good for my jiu-jitsu.”

“The thing was, my older brother wrestled in high school – and I was kind of like, ‘Ah man, I think I can do better than him!’” Eduardo shares with a laugh. “My dad always thought about wrestling as something that could help me in competition, something that would be good for building experience – he thought about it from a really mature standpoint.”

He grins. “And meanwhile, I always thought about wrestling as a little brother, trying to be better than my big brother.” It goes without saying – given those All-American wrestling accolades of his – that the teenage Eduardo’s ambitions to win the war of sibling rivalry paid off.

According to Eduardo, he’s always loved fighting. “I was talking to my mom about this recently – probably a couple years ago, during covid, she was going through our things, and started pulling up old things from when I was six years old, four years old, five years old – where you’re in school, writing down stuff you want to do. And even at that age, I was writing, ‘I want to fight MMA, I want to be in the UFC.’”

As he grew older, Eduardo toyed with the idea of specializing in a more specific combat sports discipline – exclusively chasing jiu-jitsu or wrestling titles, perhaps – but nothing else scratched the itch for him quite like cage fighting did. “I think it’s just always been in me,” he muses. “That [fighting] is what I want to do.”

The children of legends walk a tricky road in combat sports. On one hand, the names of famous fathers – or occasionally, famous mothers – often open doors that might otherwise be closed. On the other hand, once you’ve walked through that door, you’re intensely aware that everything you do will be scrutinized just a little more closely – after all, you were born with greatness in your genes, or so it’s assumed.

It’s a pattern we’ve seen play out before: Kron Gracie certainly carried the legacy of his father Rickson Gracie into his ADCC run, and later into his MMA career; current UFC star Mackenzie Dern’s famous jiu-jitsu chops were no doubt influenced by coaching from her father, Wellington “Megaton” Dias. Modern jiu-jitsu has arrived at an era in which the children of the greats from the eighties and nineties are beginning to carve their own marks on the sport their parents shaped.

“At first I used to kind of dislike [being a child of that generation] because you don’t really have your name – it’s his name, you’re his son,” Eduardo admits. “And that would kind of annoy me, and I used to kind of look at it as a negative thing.

“But as I got older, I asked myself, ‘Man, why do I feel so negatively about having such great shoes to fill?’ My dad could have been a horrible person. My dad could have been a shadow upon me. But no one’s ever said anything bad about my dad that I’ve heard, and I’m okay with that – being the son of a well-respected, accomplished person. And if that leads to me being known as ‘his’ son for my whole career, it is what it is.” Eduard offers a playful grin. “Who knows? Maybe one day, he’ll be referred to as ‘my’ dad.”

What can we expect from Eduardo’s showdown against Joseph Dorado?

“[Dorado] seems to be primarily a striker,” observes Eduardo. “But I bet you he’s training as well, so I’m definitely not sleeping on anything, or any abilities he has. I’m expecting the best out of him.”

“I think my last fights have spoken very clearly,” says Eduardo. “I go in there, I’m explosive, I have cardio to last all three rounds. I definitely go in there to finish – not just to win. I want to finish. I trust my coaches, my dad and my striking coach Steve Cantwell. I’m going in there to end it, and I’m putting it on the line – I definitely don’t want to leave it up to the judges. I have a good time in there, but I’m not going to leave room for accidents.”