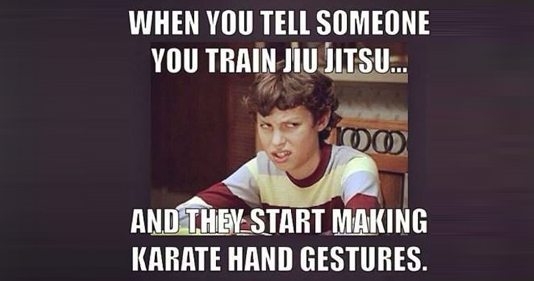 How many times has it happened? You’re on your way to train, or watching the fights, or discussing finally nailing that last move Professor taught you and someone asks..” What is it that you do again?” I dread that question! Don’t get me wrong folks, I can talk about jiu-jitsu, boxing and MMA all day. I love to promote the benefits of Brazilian Jiu Jitsu, to talk “shop” as it were, and will gladly tell you about my experiences to date. I love to learn. I consider myself a newbie still at blue belt, and will gladly listen and store away any knowledge someone is willing to part with. I hate that question because 1. people almost always equate what I’m saying to karate or tae kwon do 2. they want a demonstration or 3. they think I’m full of crap because I don’t have a broken nose, broken fingers, or huge cauliflower ears. My mini cauliflower is plenty for me thank you very much!

And while I only train jiu-jitsu, anyone who is a martial arts practitioner has the right to be a little miffed when people outside their art make assumptions. I happen to know people who practice karate, muay thai, jiu jitsu and/or box; they work hard, toil and train trying to make that magic happen! It’s difficult to explain to another person who is outside the realm of what we do, exactly what it is. Literally, I’ve had people get into a stance and do the karate chop (no disrespect guys) and say “hiiiiiyaaaa!” I mean come on, for real? I don’t blame you, it’s just frustrating as anything to think that all of the hard work we put in is pared down to this one image. So I decided to ask my non-practicing friends what they think Brazilian jiu-jitsu is or what picture the words bring to mind. Some had a better idea than I expected, while others… others just thought we were martians playing tag (lolol!).

* Do you mean that stuff people do on the ground? In those funny outfits?
* My impression of jujitsu is that it’s kind of like martial arts wrestling.
* I know what sumo wrestling is. Obviously you’re not a sumo wrestler but is it anything like that?
* From seeing what you do, it’s a lifestyle. Life is all about the training. You get out what you put in. Lots of cliches there I know. Lol
* Some kind of martial art wrestling
* Brazilian martial art… staple of MMA
* errr I know what karate is, and I’ve heard of UFC. I mean I’ve watched UFC so, you fight in a cage? or something?
* I learned about it through the UFC and the Gracie family from Brazil. They were my favorite fighters. I also looked into it when I was in Afghanistan for cardio.
* I have many friends who train or have trained for Jits and I absolutely appreciate the mental strength as well as the physical strength a person needs in order to perform.
* I know you wear pajamas, and I don’t have any respect for people wearing pajamas. But I know you so I have respect cuz I know you work hard soooo maybe I have respect for people in pajamas after all.
* Wrestling. That’s all I know, is that it’s kind of like a form of wrestling.
* UFC bro!
* I think of highly trained and disciplined people who love to compete and challenge themselves. People willing to push past normal limits.
* I think that it’s wrestling but I also heard of Judo. I know Judo is where you throw people. But maybe it’s like karate? I’m sorry man, I just don’t know for sure, other than what I’ve seen on UFC, and I know you don’t do that!

I’m cringing, but I’m also pretty pleased with the responses as well. People were honest about what they know, or don’t know, and what they understand. I think that it’s truly up to us, as practitioners, to positively promote and educate people about our art. I’ve started skipping the verbal explanation and just pull up a YouTube match on my computer or phone! The “aha!” look on faces is worth it! I’d love to be able to talk with Brazilian jiu-jitsu practitioners and non-practitioners alike about something that is such a huge part of my life. Frustration on our part doesn’t help the cause. So next time someone does a karate chip at your head, laugh, pull up YouTube, and educate a body.