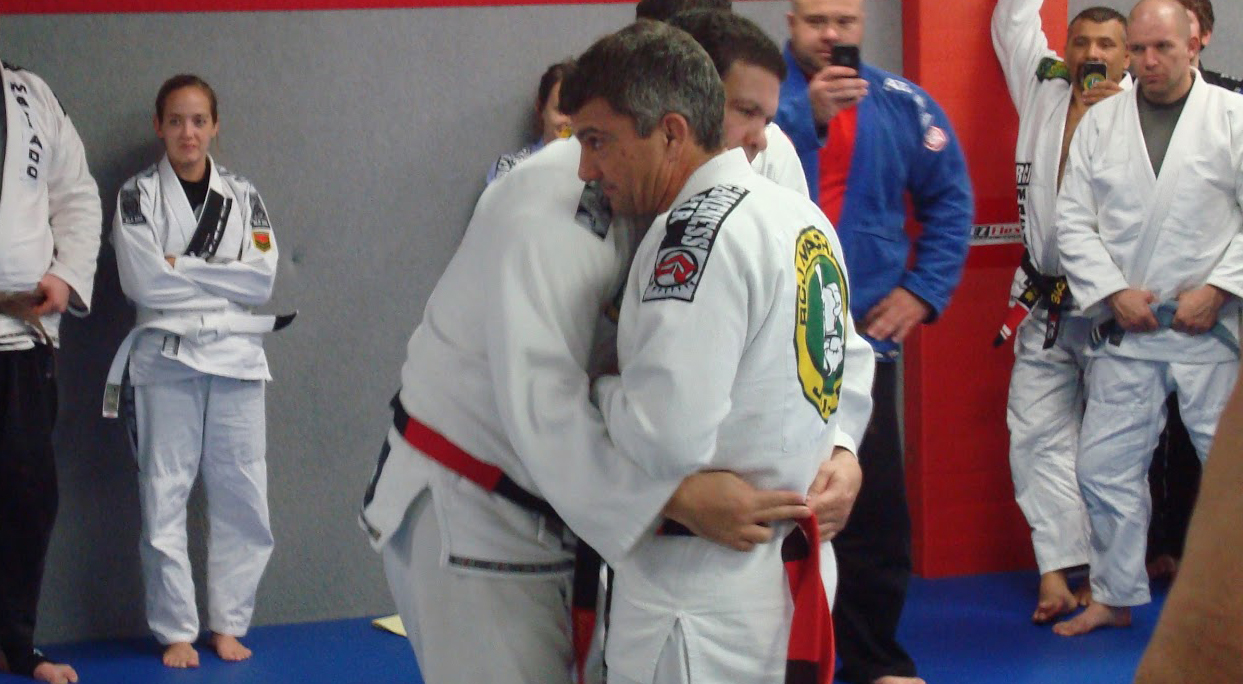 Carlos Machado Talks about Mr. Pittman’s academy and why he was giving kids Black Belt.

If you haven’t seen the kid black belt click here

“Learning the facts before spreading opinions is a good start! A stripe at Mr. Pittman’s academy is earned after a kid spends 200 hrs on the mat. It is a reward for the commitment, not an award for a rank alone. 7 stripes, in this case, equals 1400 plus hrs on the mat! In an age of children wasting precious time indulging on watching TV and playing video games, I believe it is a memorable feat to keep a youngster of that age focused on an activity which will bring way more positive results to his character and self esteem than electronic entertainment! Another aspect is the frequency in which children leave martial arts academies to play sports like baseball, football, basketball, and etc. The window is short for an instructor to keep a young student long enough before he/she ventures into the “more appealing” sports amongst their peers in school! Stretching their membership at an academy for an extra year may cause that kid to have a change of heart and choose to stay as a martial artist instead, or even if leaving his/her academy, will still retain the memory of the positive influence he/she received, and likely return back to martial arts during his later teen years. That is the whole reason he decided to implement a Junior Black Program for his youngsters. That does not mean they compete as Black Belts at an IBJJF event, it is a motivational tool to foster an ounce more of commitment when often kids would choose a different path instead! The reason Mr. Pittman calls his Academy a Black Belt Academy is not to become a factory of ranking belts, but to reflect the fact he has a curriculum written and followed to the letter for every program he teaches, from kids to adults, all ages! He took the time to write it down, teach each of his instructors what and how to teach the curriculum, and then went on to work on the belt system to create bench marks for each time a student covered enough ground to become eligible for rank advancement! If someone asks him what it takes to become ranked at his academy, he has everything laid out in advance, instead of leaving the rank to guessing or to how many tournaments are won before granting someone one of his belts. Some of his students are competitors, and have faired well on several tournaments, from IBJJF to Nagas! Yet, his school offers opportunities for those who are not competitors, yet would like to be martial artists as a hobby or lifestyle. Should only a smaller portion of the Jiu-Jitsu population (competitors) be the only ones who can have a shot to succeed in earning a rank? Mr. Pittman also extensively covers self defense, which in many instances are neglected by sports oriented only academies! That is not usual for the average BJJ Academy to follow to such a degree a well and sound structured martial arts academy, and it is also not usual for the average BJJ Academy to attain the same results in terms of numbers, both of student base and revenue (Pittman’s Academy is the largest BJJ school in the entire Southwest, and likely one of the largest in the Country, by all measures)! On another note, since Mr. Pittman started his unique structure, it was agreed between he and myself that I would apply an equivalence assessment of any of his students who were to transfer to my academy, or compete at Jiu-Jitsu tournaments, in which an adult Jr. Black Belt or different color belt was in place. I often placed Junior Non Red Bar Black Belt students (it takes 7-8 years for an adult to earn a Black Belt with a Red Bar at his academy) from Mr. Pittman as high blue or purple belt level at my dojo. Often, several of his students, when competing at IBJJF events, would use the rank in accordance to IBJJF rules in order to register for their particular tournaments. He did not infringe on my ranking nor on IBJJF at any time! Yet, he runs his business as he sees fit, and has complied with every rule on the books, whenever rank outside his uniques system was in question, whether at tournaments or regarding transfers to my or other instructors’ academies! He cannot be blamed for being successful, nor be accused of being dishonest or lack integrity by doing things the way he does! In my view, any opinion based on ignorance of the facts above stated constitutes slander!”