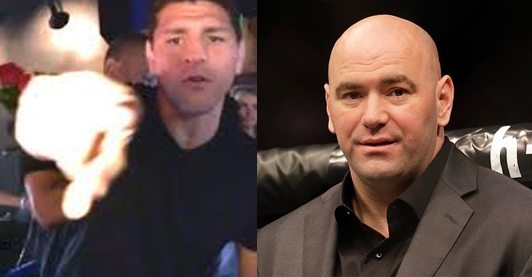 “Nick is being Nick. We don’t know where Nick is. I literally Instagram’ed a picture of him on a milk carton today. He’s M.I.A. First of all, we have a show called UFC Embedded, they showed up there Sunday to start filming him — couldn’t find him. We went through his management team and they set it up, they said ‘what we’ll do is we’ll set up a team dinner, you guys can film at the team dinner.’

“None of them showed up at the team dinner, then nobody answered their phones when the guys started calling. So then yesterday Nick was supposed to land in Las Vegas at 2:20. He missed his flight. His management team called and said, ‘book him another flight at 7:30.’ Not only did he miss the first one, he missed the second flight. His bags made it to Vegas and he never did.”

“The problem is this: it’s too late. I already made the fight. We’re sitting here on Wednesday. There’s a lot of things he doesn’t show up for, but he always shows up for the fights, so I’m counting on him showing up.

“I did it to myself again. I made a fight with Nick Diaz, a big main event fight. You know, when you get him in the office and you sit down, and he’s like, ‘Well, you know, I feel like I haven’t been paid right. Pay me right.’ He’s being paid right for this fight. It doesn’t matter how much you pay him, he’s not going to… I did it to myself, so I can’t sit here and cry about Nick Diaz. It’s Nick being Nick.”