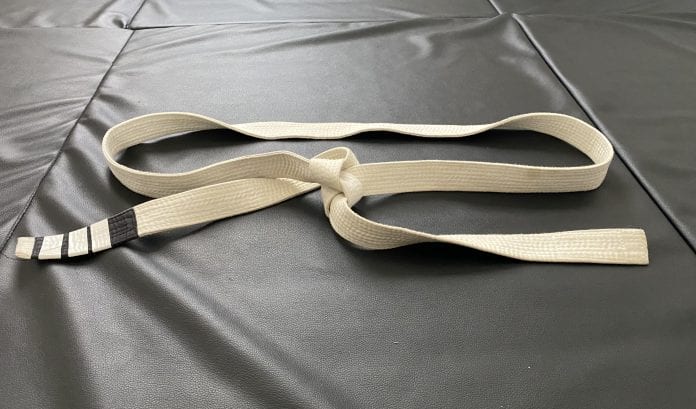 There’s a reason it usually takes at least ten years to get your black belt in jiu-jitsu: BJJ is really f-ign hard.

You tend to figure this out pretty quickly as a white belt, usually around the time you get absolutely wrecked by someone who looks like they shouldn’t be able to destroy you, but destroys you anyway. It feels like witchcraft, sometimes, when you throw everything you have at one of your more experienced training partners and absolutely none of it works.

As a white belt, this can be either motivating, disheartening, or a confusing combination of the two. Much like it’s hard to imagine your grandparents without wrinkles, we tend to think that the people who are really good at jiu-jitsu have always been really good at jiu-jitsu. Logically, of course, we know that everyone once had their first day and probably (definitely) struggled quite a bit to get where they are today, but when you have a purple belt glued to your back and sinking in a choke for the fifth time in as many minutes, it can feel impossible to envision yourself handling newbies with that same ease a few years down the road.

I’ll say it again: BJJ is really f-ing hard. At times, you’ll think it’s getting easier, and then it will get even harder. You’ll be introduced to new challenges at every step of the way, and they don’t always revolve around getting a specific technique to work. Sometimes, the obstacles are emotional — an aching desire to compete accompanied by a crippling fear of competition, for example. Other times, you realize the hard way that you have some big holes in your game… and the upper belts have suddenly decided to stop going easy on you.

When jiu-jitsu is brand new to you, the valleys will seem lower and the hills will seem taller. Your first successful armbar will feel like the most amazing achievement ever, but the days when the techniques don’t make sense will feel even more frustrating. You’ll be introduced to new BJJ-specific vocabulary all the time, and much of it won’t make sense. You’ll watch as other people perform complex movements with ease while you struggle to shrimp correctly. You’ll want to skip ahead to the “good part” when, even if jiu-jitsu isn’t easy, it at least makes sense.

It’s ok to feel like this. Pretty much everyone does at some point, and although it’s painfully cliche, every brown and black belt ever was once where you are now. They are brown and black belts now because they stuck with it through all of that, not because this was ever easy for them. They’ve all had days when they had to take too long in the shower after training to process their feelings about a particularly tough session. Most of them have questioned if all the sacrifices they make in order to train are really worth it.

The good news is that you’re supposed to be going through this. It would be very alarming if you were a few months into jiu-jitsu and cruising through classes and rolls with the same ease as people who have been training for years. The fact that you don’t know anything and all of this is really hard is the reason why you are a white belt. If you aren’t struggling, your coach is either going way too easy on you, or you probably shouldn’t be a white belt anymore. If the things that are easy for blue belts are hard for you, well, congrats — you’re exactly where you should be.

Getting good at jiu-jitsu means getting comfortable being bad at jiu-jitsu. It’s a bumpy road paved with setbacks and injuries and self-doubt. The road never gets smoother, but you learn how to drive. You get better tires, put on some good music, and meet some great people to bring along as companions for the trip. You may have started this journey with the destination in mind, but eventually, you may find that you’re happy to just keep driving.