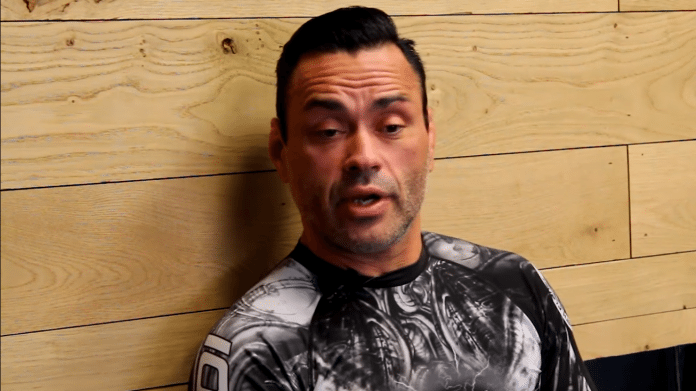 Eddie Bravo’s 8-year old son has no interest in learning the family martial art, but Eddie has a few tricks up his sleeve in order to persuade him.

It was about 1 year ago that Eddie was featured on Jean Jacques Machado’s ‘No Gi Required Podcast’, but JJM just reposted a short clip from the conversation, where Eddie talks about trying to convince his 8-year old son to train jiu-jitsu.

Eddie explains his son’s current pursuit of karate, “My son is into karate. He doesn’t want to do jiu-jitsu right now. He’s 8 and he’s been doing karate since he was 3. And I don’t mind. My son wants to go his own way and he just wants to be a striker and he’s like 19-20 and I’m like ‘my son doesn’t do jiu-jitsu but he’s a bad *** striker’ I think that’s way cool, too.”

However, Eddie playfully suggested that he has a foolproof strategy that should get him to put on a rashguard, “when he’s like 12 or 13, I’m going to hire a jiu-jitsu kid and give him 20 bucks and have him choke my son out so that my son can come to his dad and say, ‘Dad, can you show me that stuff you’ve been trying to show me?’”

He goes on to clarify that hiring the kid is actually plan B. Plan A, on the other hand, was to show his son the ‘Gracie Jiu-Jitsu In Action’ documentary, where the Gracie family travels to gyms of various martial arts disciplines and challenged their fighters. The film is historically known for demonstrating the effectiveness of jiu-jitsu before mixed martial arts became a sport. “Usually when you watch that, you want to drop everything and run to your nearest jiu-jitsu school.” Eddie said, “That’s the effect it had on most people… not my son though.”

JJM assures Eddie that his son will come around, “I have no doubt that he’ll learn and he’ll learn from one of the best ones out there.” Machado reminds Eddie, “When I met you, you were really into football.”