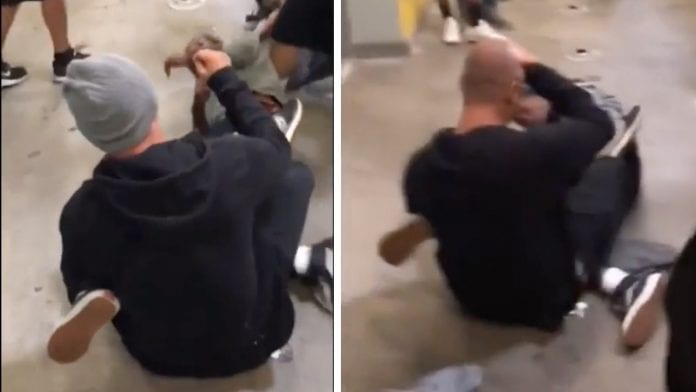 Every been clocked by a wild punch in a fight you’re not even part of? If not…it sucks, and it’s infuriating. Which is why we’re especially impressed with this gym teacher, who not only keeps most of his cool, but reaps no knees and uses 50/50 only for good when two students go totally ham in the hallway.

As you can see, the video starts with an effort to de-escalate the situation. The teacher, soon-to-be-victim, tries to get his charges to settle down and act right by getting between them. And then…they don’t. At all.

Immediately after being knocked down and possibly unconscious for a moment–possibly just hard in the dome–the teacher regains motor control and settles into a casual 50/50 as a way to keep his student from getting into a bloody battle. Fortunately, someone else steps in and holds back the other fighter in the altercation. Not that it matters at that point.

“God dammit,” says the teacher, post-headstrike and validly angry. “Call the f***ing cops,” he calls out, holding one offender in place while rubbing his head. “Damn, I got hit in the head.”

Here’s the brief battle. It’s something that could have got even uglier, had the adult in the middle of the situation not had training and a desire to actually help his students even as they do wrong by him: