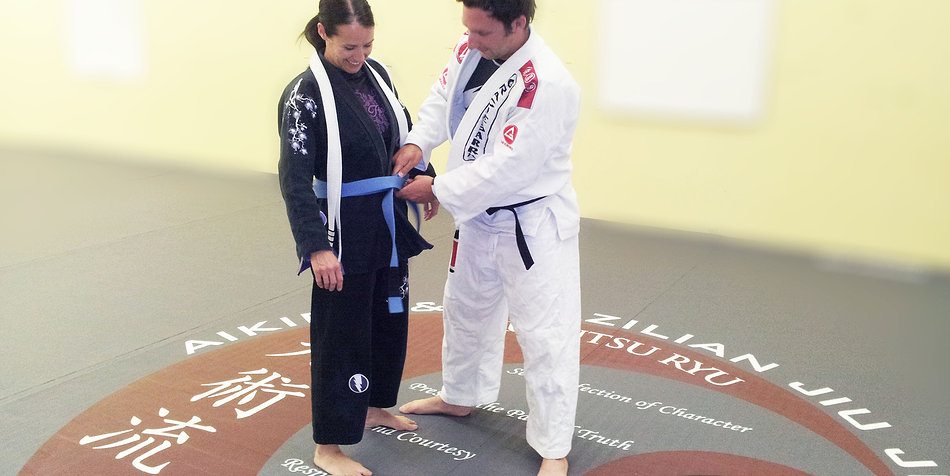 I recently read an article published by one of my colleagues over here at Jiu Jitsu Times about Jiu Jitsu ranking and sandbagging. His views were a bit controversial and I have some thoughts on the matter that I’d like to share.

First off my background: for anyone who doesn’t know me, I started with Kenpo Karate back in 1993, did that for a few years then did western boxing and Muay Thai. Then in 1997 I started dabbling in grappling arts, specifically the club where I was training had some people who liked to play around with catch wrestling, Judo, Sambo and Aikido. As and aside, in the initial Kenpo self defense curriculum we learned some basic headlock defense, wrist locks and hip tosses (all very basic but still exposure nonetheless.) In 1999 we had a guy start training with us who was Josh Lauber’s (Relson Gracie black belt) training partner in the Cleveland area where I lived. He started teaching us some basic BJJ. I did that off and on for a few years (more off than on); I also wrestled my freshman year in high school. Then I took a few years off. In 04/05 when I was in college I’d occasionally drop in at Binghamton University no Gi BJJ club, which at the time was run by Mark Tse (now a decorated black belt under Eduardo Rocha,) again I wasn’t really training smart or trying to get good, just going in and rolling. I did that off and on throughout my college career (again far more off than on). In 2011 I started training in the Gi as a white belt and competing seriously. So yeah I’ve been around the block.

In 2011 when I started training in the Gi, I didn’t know how to execute a basic arm bar or triangle. I was tougher than most new white belts, and in the right position I could submit some blue belts, but I was definitely as much a white belt as any other person who starts BJJ with extensive martial arts experience in other arts. I had never trained under a credentialed instructor, I had never learned to shrimp, I liked grappling and I had messed around with it off and on for years, with years off in between, but I was without any doubt a white belt.

When I entered my first few tournaments, I competed the same way most white belts compete. I jockeyed for position for the majority of the match and eventually fumbled my way into a good position. I lost as many matches as I won. Because of my substantial background and time I had spent prior to starting my serious training, I picked stuff up fast and became formidable within about 2 years, but because of my unorthodox style my instructors didn’t want to promote me and kept me at white belt.

Eventually, after training for just over 3 years (taking 6 months off in between due to injury) my current instructor gave me my blue belt. It was my coach’s decision, not mine. I’d have happily stayed a white belt forever. Rank really and truly doesn’t matter to me.

As for competition: if you don’t know which division to enter, ask your coach. If your division is divided up by belt rank, enter the bracket which is associated with your belt color. I don’t care if you’ve trained for 50 years, if you wear a white belt and your coach hasn’t promoted you, that’s on THEM not on you. Maybe there’s a reason you haven’t been promoted. Or maybe you are in fact sandbagging, but that is not your concern, it is your coach’s.   In No Gi, choose the division you feel is appropriate for you. If you are not sure, again, ask your coach! Yeah I had a bit of a head start because of my other training, but many people have SOME martial arts or wrestling background and they can’t walk into a BJJ gym and demand to be promoted to blue belt, they start at the beginning just like everyone else.

I’d say a good measuring stick is going in and competing at the level assigned to your belt rank or experience, if you win a few tournaments at that level, consider stepping up your game and going into a higher bracket. There’s no honor in defeating people with inferior skill sets, but again own your belt rank.

Just as people learn at different speeds, so people progress in Jiu Jitsu at different speeds. I’ve seen people walk in fresh off the street who have more natural ability than some purple belts that I’ve seen. The only form of sandbagging that I look down on is someone who down-ranks themselves for the sake of competing at a lower level. Own your rank, and remember it’s just a construct put in place by fallible people. Also own your failures, if you lose in a tournament to someone don’t blame it on their training, blame it on your own errors.