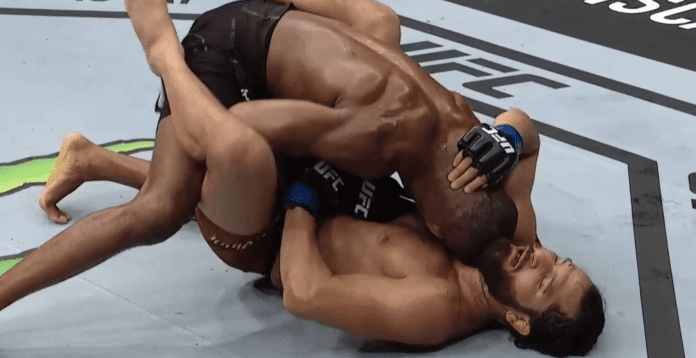 I blame the haters for this.

Kamaru “The Nigerian Nightmare” Usman has defeated Jorge “Gamebred” Masvidal to retain his Welterweight title at UFC 251. Masvidal, taking the fight on six days notice, vowed to “…win a few fights then run it back,” after the decision was read.

Round one saw the champ employ the gameplan many assumed he’d use. Catching a kick early, Usman scored the takedown to guard where he rained down punches on Masvidal. Getting through with a big elbow, Usman transitions to a front headlock as Masvidal scrambles to his feet. Both men return to striking, where Gamebred pulls ahead with several big combos and body kicks to end the round. Unfortunately this marked his last major round of the fight.

The proceeding rounds contained Usman’s incredible grappling and cagework nullifying the majority of Masvidal’s striking. Not content to hold him, Usman was also able to employ foot stomps and shoulder strikes to keep Masvidal occupied instead of trying to escape. While he was able to get free and land some decidedly choice kicks and hooks on the champ, Masvidal was unable to keep up his pace into the championship rounds as most of his strength was focused on defending big takedown attempts. An accidental low blow from Usman (just above the groin) led to a brief respite for both men in round three, but this is where the weariness truly begins to show for the challenger.

The championship rounds began with the champ going from landing a big body kick to another takedown attempt against the cage. He reshoots a double and puts Masvidal down. The round sees Masvidal landing a few shots but struggling against Usman’s pressure against the cage and a nasty elbow at the close.

Masvidal needed the KO in round five. But with Usman getting a takedown into eventual side control, the man from Miami was just trying to survive. Thundering down with elbows and hammerfists, Usman worked to keep Masvidal pinned to finish the match. Masvidal is able to scramble back to his feet and initiate some big offense, but the round ends with a clear winner in Usman.

“Gamebread is tough, and he showed it out here today,” Usman said in the post fight. Usman then expressed a desire to vacation with family before entertaining his next fight.