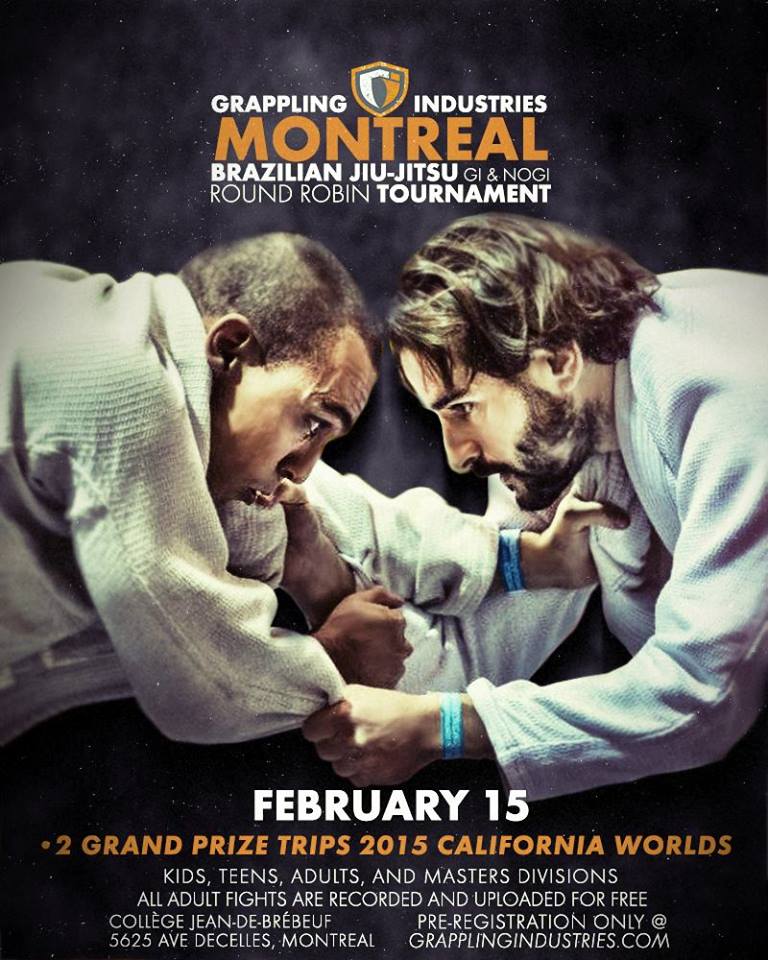 Every once in a while I’m lucky to speak with someone who has a vision or an idea and they MADE IT HAPPEN. David Aguzzi was kind enough to share his story and the dream behind Grappling Industries. Tired of the one and done philosophy, David wanted to provide us competitors with a little something more. A round robin format, high stakes prizes, and an overall positive experience makes Grappling Industries enticing. Without further ado, here’s David Aguzzi’s story on what makes up and coming Grappling Industries one to watch for!

“When I was about 15 years old, I sat on the end of the mats looking at my training partners roll. Sweat was running down my face, I was back in the gym the Monday after a disappointing loss at a tournament two days prior. You see, I believe I am a winner and by that I mean that when I compete I will win a lot and every so often like everybody, I will lose here and there. This previous weekend was different though, I lost in the first round of this competition. I have never realized how much it sucks to lose in the first round of a BJJ competition because it had never previously happened to me.

You spend $100 in registration fees, train hard, diet and you have to travel to an event. A lot of work and even money goes into competitions and to lose and be eliminated just like that in my first fight, bothered me a lot. I knew this was a problem that had to be corrected, especially in a martial art like Brazilian Jiu-Jitsu but I didn’t know how to voice my theory that we should out single-elimination formats from tournaments.

Competitions have become sparse in Montreal. There is only one actual BJJ event in the city and it doesn’t include nogi divisions. I wanted to give running BJJ tournaments a try; this could be my chance. The real motivator was the fact that there was only one tournament in Montreal and it was only once a year. What if I was to host 3 or 4 more modern and better produced tournaments? This would fulfill the desire of so many doing BJJ to compete again and more regularly.

My idea was if you lost at my events you would not be eliminated. I convinced myself that a round robin pooling format alongside a playoff structure was a much better set up and experience for BJJ competitions.

* provides competitors with at least 3-6 matches in their division “We have had competitors have as many as 10, 12, even 17 matches in one tournament. 17 Matches! That’s Ridiculous!”

* Champion of the division doesn’t necessarily mean champion of GI. Still have to make it thru playoffs.
“There is nowhere else where you can lose in the first round only to realize you have the opportunity to redeem yourself and prove you belong.”

* Provides a library of matches for competitors on YouTube free of charge. ALL COMPETITORS.
“Watch your growth over time, view upcoming grapplers, and watch some of the best fights we have ever put on. We believe that everyone should have the opportunity to have the footage of their work on the mats.”

* All paid Grand Prize trips include airfare, 2 nights’ hotel, and registration to the tournament that the Grand Prize is designates.

* We give out tons of sponsored swag, and we have gone as far as to even give every competitor at certain Grappling Industries’ tournaments a FREE rash guard.

Big rashies, little rashies, something for everyone…

“We believe it is important that the prizes we give away at our tournament display our everlasting commitment to building and developing the grappling community. For example, In our expansion to Australia, we are giving away $6,000 in money in our first two shows in Melbourne (March 21, 2015) and Sydney (April 11, 2015) and that doesn’t include the 50+ items of swag we have put together from our amazing sponsors for the tournaments there.”

I believe that if we can keep the standards high and the concept unique then we have a great chance of making Grappling Industries a force to be reckoned with in regards to tournament quality, efficiency and fun! Nothing is cooler as a promoter than having competitors come up to you at events to tell you they loved how smooth and organized the tournament was.

As a promoter on the actual event day, I have two responsibilities. The first is that I need to make sure everyone is smiling regardless of if they are sponsors, competitors, or even spectators; all these people sacrificed their time to be here and invest in my event. I owe it to them for coming to make sure they are having a great time, smiling is contagious and the more smiling the better and more productive the atmosphere. The second thing which is running the tournament as smooth as butter. I demand my staff be on point and that the mats are consistently running matches. It is our job to get you through the tournament as efficiently and organized as possible.

We as promoters must acknowledge your support and show appreciation to you by not only giving you a great product and experience but to also make sure you have time to enjoy the rest of your day as well.

Thank you David, I can’t wait to compete at a Grappling Industries tournament!