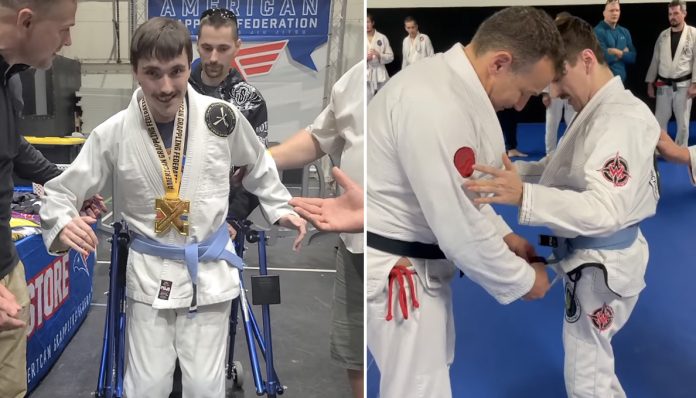 Nick Turnbo isn’t your garden variety combat athlete. Born with cerebral palsy, a motor disability that affects his strength and balance – in Turnbo’s case, primarily his legs, which necessitates the use of a walker – he’s no stranger to training through adversity. “He’s a survivor,” says Turnbo’s mother, Patty. “He’s twenty-three now, and he’s been working hard and surviving his whole life.”

These days, Turnbo does a whole lot more than just survive. He’s been thriving on the local tournament circuit in competitive jiu-jitsu, claiming a gold medal this November at an American Grappling Federation event, where he won his match by submission with an Americana arm lock. “I felt confident that I was going to win,” Turnbo tells the Jiu-Jitsu Times. “I went for an omoplata, but when the guy started to roll out of it, I caught his leg, got back on top of him, and went into mount.” Taking advantage of the dominant position, Turnbo was careful to maintain his balance, despite his opponent’s best efforts to escape. Shortly after, Turnbo locked up the Americana and earned the tap – along with his latest medal.

Turnbo’s most recent AGF win isn’t the athlete’s first rodeo either – he entered his first tournament all the way back in 2017, where he also won his division by submission. “I was kind of nervous going in,” he confesses, “but then I won by bow and arrow choke! I didn’t get all the details perfectly right – I’d just learned that submission two days [before the tournament], but it worked. The organizers of the tournament wound up including my bow and arrow choke in their highlight reel, which they posted on YouTube.” Grinning, he adds, “Now, every tournament, I try to do a different submission.”

Turnbo has only grown as a jiu-jitsu athlete in the years since that unconventional bow and arrow submission – he’s worked hard at improving both his takedown game and his ability to apply pressure to his opponents – but he’s always been all-in on the mats. Currently a three-stripe blue belt under Rickson Gracie black belt Professor Rodrigo Vaghi, Turnbo started his training under Team Vaghi affiliate Mike Rogers at St. Charles MMA, who eventually recommended that Turnbo train directly under Vaghi after seeing how seriously Turnbo was taking his jiu-jitsu career.

“Team Vaghi is unique,” says Turnbo’s mother. “They’ve been around for so long, they already know what a lot newer jiu-jitsu gyms still need to realize – which is that jiu-jitsu really is for everybody. You don’t have to have an able body to do it. Someone can come in with a disability, and be able to do this. [Team Vaghi] helps everyone who’s there realize that you can enjoy yourself – you don’t just have to sit at home.”

Turnbo’s training schedule is intense. He trains an hour each week with strength and conditioning coach Brian Fitzmaurice to improve balance and leg strength; in addition, he takes jiu-jitsu class twice a week for two hours each, including both instructional and sparring time. On days that he isn’t training with Fitzmaurice or on the mats, Turnbo is hard at work at home doing his own strengthening and stretching exercises. It’s a routine that might seem grueling even to most able-bodied athletes, but Turnbo embraces the regimen wholeheartedly, eagerly explaining the ways that his jiu-jitsu practice has improved his overall well-being. “I concentrated a lot on stretching when I was growing up,” says Turnbo, “but through training in jiu-jitsu, I’ve found that strengthening my legs and core are what really help my balance. It also keeps my muscles loose.”

As an athlete affected by cerebral palsy, Turnbo finds creative ways to accommodate his physical disability on the mats. Because cerebral palsy primarily affects his lower body, the ground-based nature of jiu-jitsu has, in many ways, proven itself the ideal martial art for Turnbo, who can play off his back through clever modifications and apply his comparatively powerful upper body strength.

“In some ways, the cerebral palsy ends up being an advantage,” says Turnbo, “since it means my movement on the ground is unconventional, so opponents don’t always know how to deal with it.”

Despite his own myriad accomplishments, Turnbo is more eager to talk about – and shout out – the remarkable network of martial arts and physical fitness professionals who have supported Turnbo’s jiu-jitsu career since its inception. He credits Vaghi, Rogers, and Fitzmaurice with going above and beyond to help him develop a jiu-jitsu game that not only accommodates his disabilities but also enables him to best able-bodied athlete in competition. Turnbo also considers Rodrigo Vaghi’s black belt Professor Todd Fox a longtime mentor. “[Fox] has all of the qualities I strive for,” says Turnbo. “I am inspired by his commitment, and do not believe I would have achieved so much without his guidance.” In his spare time, Turnbo has been reading Fox’s nonfiction book on self-defense, Protection For and From Humanity.

Turnbo has also bonded with luminaries in the world of combat sports, including UFC star Michael Chandler, a fellow alumnus of Turnbo’s alma mater, Northwest High School. After seeing all the memorabilia at the high school showing off Chandler’s wrestling accomplishments – and seeing how far a fellow hometown boy could go – Turnbo was inspired to take his grappling game to the next level. Turnbo finally got the chance to meet his hero at Thoroughbred Wrestling Academy in 2015. Ever since, Chandler has kept in touch with Turnbo, even taking time out of his schedule to catch up over video chats. “He’s a really good guy,” Turnbo says of Chandler. “He worked hard to get where he is, does what he says, and he always follows through.”

Turnbo also sees support and frequent encouragement from local up-and-coming pro fighter Evan “The Phenom” Elder, who met Turnbo via fights at nearby MMA promotion Shamrock FC. Fighting out of Sanford MMA, Elder is currently undefeated, boasting an impressive 7-0 record, but is never too busy to spend time with Turnbo. Turnbo once asked, a little nervously, “If you make it to the UFC, are you still going to talk to me?” Elder’s response was an enthusiastic affirmative.

Jiu-jitsu and MMA aren’t Turnbo’s only athletic passions either. A true multi-sport athlete and die-hard St. Louis Cardinals fan, Turnbo also plays baseball with Challenger Baseball. While baseball and combat sports might not initially appear to have much in common, Turnbo is quick to compare the camaraderie of his baseball team with the social bonds he’s built at Team Vaghi. “We think of jiu-jitsu as an individual sport, but the support from professors and teammates really helps on a mental level,” Turn bo explains. “It’s the social aspect. It’s not about how good you are, it’s about being around people – the camaraderie, the support, the socializing.”

Through his passion for jiu-jitsu, baseball, and sports in general, Turnbo hopes to inspire others to get moving. “Find something you’re passionate about, and do it,” he advises. “Others should not be afraid of people with disabilities. We are not fragile. We are stronger than they think!”

Stay updated on Nick Turnbo’s jiu-jitsu career by following his Instagram and Twitter, or checking out his LinkTree.