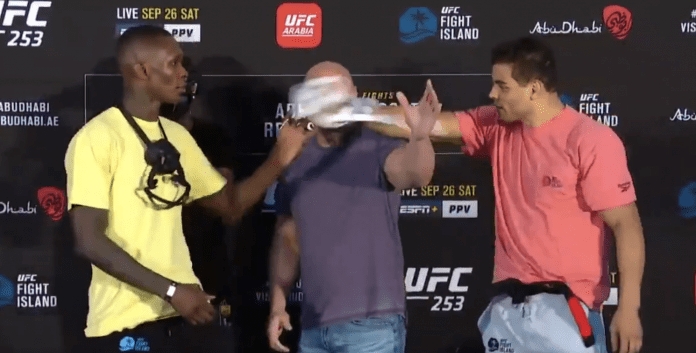 Paulo Costa and Israel Adesanya have a highly anticipated fight coming up in the main event of UFC 253 this weekend, and things got personal at the weigh-ins.

The two fighters already did some verbal sparring at the event’s press conference, with Costa, a BJJ black belt, professing his grappling prowess and criticizing Adesanya’s ground game. Adesanya, a blue belt, threatened to submit his opponent, to which Costa replied, “Bullsh*t. You’re a blue belt in jiu-jitsu. You cannot say nothing about jiu-jitsu. You’re like a kid in jiu-jitsu. You don’t know how to do an armlock.”

Adesanya replied, “I’ll berimbolo you if I wanted to. I’ll grab your f*cking collar right now and put you in a bow-and-arrow.”

To which Costa said, “You never put a gi on your skinny body. Talk about jiu-jitsu with me — You’re crazy.”

The middleweight champ took one final jab at Costa in the form of a very on-brand jiu-jitsu joke: “I take acai, too.”

As it turns out, that wasn’t the end of the BJJ beef between the opponents. At the weigh-ins, Costa came out with his black belt tied around his waist. Then, he pulled out a white belt and threw it at Adesanya, who hurled it back at him as security held the fighters back from each other as they exchanged a few more verbal barbs.

You can watch the moment below:

THE BEEF IS REAL 😤

Things get personal as Costa taunts Adesanya with a white belt at weigh-ins.