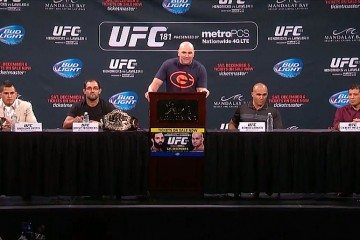 The UFC recently announced a partnership with Reebok; upsetting the sponsorship game as Reebok uniforms will be implemented. Expanding upon that will be deals made with Rousey & Jones

According to the announcement, the champs “will be working closely with Reebok to help develop and launch the brand’s new range of UFC apparel, as well as a new collection of footwear and apparel specifically created for the more than 35 million people around the world who participate in combat training to stay fit.”

Apparently while some will be riding that Reebok train all the way to the station, others aren’t particularly thrilled.
http://www.mmaweekly.com/fighters-react-to-ufc-implementing-uniforms-via-twitter”

Adding to the UFC excitement is the impending UFC Class Action lawsuit… Dana White’s head must be spinning.