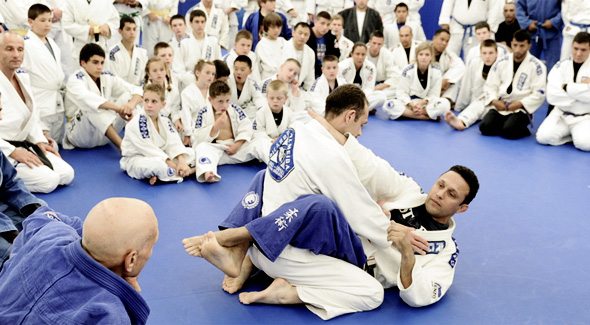 Jiu-jitsu legend and world renowned coach Renzo Gracie, 47, grandson of the founder of Brazilian jiu-jitsu, Carlos Gracie, comes from a long bloodline of respected martial art practitioners. The Gracie Clan has stacked up plenty of fighting accolades over the centuries. Every fight fan knows of this legacy from Royce Gracie’s UFC Hall of Fame status to Rickson’s perfect 11-0 record.

Following in the family’s footsteps Renzo has immersed himself in every aspect of the mixed martial arts lifestyle since he was five. Renzo, a 6th degree black belt under Carlos Gracie Jr. – he also holds a black belt in judo- was an active professional fighter from 1992 to 2010 racking up a record of 13 wins, 7 losses, 1 no contest and 1 draw. Renzo has coached an intimidating list of mega MMA stars like Matt Sera, Gunnar Nelson, Kyra Gracie, Rolles Gracie, Ricardo Almeida, Georges ‘GSP’ St. Pierre, Frankie Edgar and Chris Weidman, just to name a few. So, when Renzo Gracie sees bright future for jiu-jitsu in Abu Dhabi and

“It has everything to become an Olympic sport,” Renzo admits at the Abu Dhabi Eduction Council’s workshop for instructors recently at the FGB Arena at Zayed Sports City. “Now in partnership with the Emirates, I believe it is a certain goal.The sport is growing all over Asia. It is already big in North and South America. It can’t be ignored anymore. It is a matter of time before we get in there.”

This is not the first time Jiu-jutsi has drawn attention from the Olympic audience. Since 2012, jiu-jitsu’s role in the Olympic games was a major debate within the mixed martial arts community. Some would argue that the Olympic games already include such combat sports as wrestling, taekwondo, judo and boxing, all of which already make up a large portion of mixed martial arts. Even Dana White, President of the UFC advocates for a reform of MMA by organizing, regulating and further legitimizing it for professional ranking.

Renzo counters, “This won’t take long for the sport to reach the Olympics because the last championship in Abu Dhabi drew more than 3,000 participants. The last competition in California had over 2,500. These numbers would certainly not go unnoticed.”

Some would say that Brazilian Jiu-Jistu kick started MMA into what it is today. Since then mixed martial arts has gained incredible momentum by turning heads and highlighting fighting legends. Fans of MMA are beginning to ask why MMA hasn’t yet sparked the curiosity of the International Olympic Committee.

Gracie, who is no stranger to Abu Dhabi and its fight history, says, “Abu Dhabi was a small city when I first visited 21 years ago, and the growth of the city to what it is now is an amazing development. Jiu-jitsu, too, has grown as much as the city has developed. It is amazing to see how much the sport has grown.”

Gracie expressed gratitude as he noted that jiu-jitsu took off in the region and imagines it continuing to grow as time progresses. He said the sport’s beauty and athleticism is constantly evolving. New techniques are constantly being mastered by each of its practitioners every day. Over time, the Olympic Committee will have to take a closer look at this fighting phenomenon.