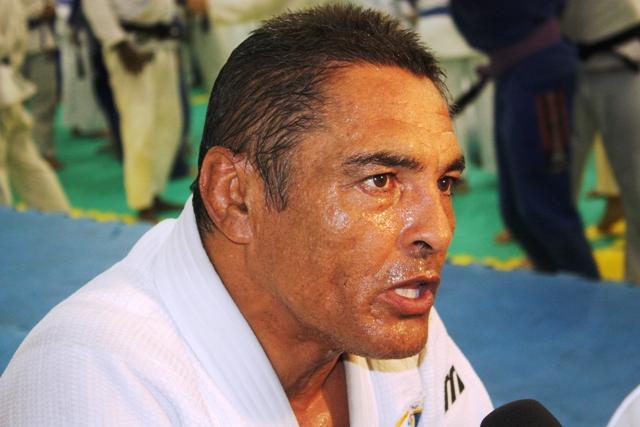 From An interview at World Jiu-Jitsu Expo in 2012 | shakiaharris.  Rickson Gracie, one of the biggest names in jiu jitsu, had a few choice words to say about MMA. He is one of the most renowned professionals in the field and he believes that while martial arts are an exciting and necessary part of life, that MMA is not in the same field. He believes that while MMA could be taken in a positive direction, it is currently not going in one, especially since there are so many principles missing from the approach that the fighters take in the ring.

“Rickson: This is what I think. I feel that MMA has moved away from what I believe is the purpose of going to a gym to train. I think there’s a philosophy behind martial arts, which should go along with training and go hand in hand with a fighter’s routine. Nowadays, the first principle is that there is no philosophy. It’s about cross training. You’ve got to cross train to be able to fight, kick, and hit. Every rule draws you to an extreme sport without a code. It’s about the individual. Nobody’s measuring anyone’s technical potential anymore. They’re measuring explosion, force, speed, the ability to withstand impact, toughness.

In my opinion, that’s something that downgrades the image of martial arts. It’s something I just don’t believe is a reference for kids. What kind of father would like to see his son in MMA? At the same time, what kind of father would not like to see his son fighting Jiu-Jitsu as it should be taught, correctly, in line, organized, learning to respect, learning to fall and get back up, learning to be kind to your opponent. Every father would like to see his son learning to defend himself but with respect, with peace in your heart. That being said, I have no interest at all in martial arts being mixed, this thing without any doctrine or concept. Today, MMA has simply turned into a circus, extreme, violent, and sensationalist, which only attracts people who like barbarism and all that blood.”

He has said that he fights for his honor and for his love of the sport. He believes that other fighters, on the other hand, focus more on fighting for money. This means that they will never be held in the same regard as himself because there are simply no comparisons to be made in that disparity of principles. He believes that he does not have anything to prove to anyone, which means that his approach will always be more pure. He thinks that too much of MMA now is about the
violence and not about the practice or philosophy behind the art.

When he was asked about where he believes the sport of MMA will go, he said that he is not sure. He believes that it will be in the hands of a higher power because he can see that there are many ways in which the sport could go. He has said that he thinks that many people are taking advantage of it currently, which results in problems in the way that the sport is represented for younger generations of interested fighters and practitioners.