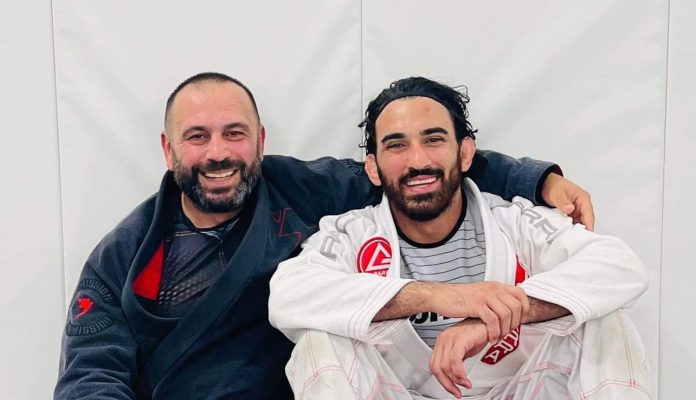 I consider myself a member of the generation that grew up watching Bruce Lee films.  During my adult life, I have mastered different martial arts.  In the 1980s I took up karate, then taekwondo .  Everything changed with the first UFC tournaments when all martial arts fans could actually see and appreciate the real fight, one martial art versus another martial art.
Skinny and not very athletic Brazilian guy easily defeated athletes far superior to him in mass and muscle strength, unforgettable feelings.
For me personally and for many others in my generation, it was a real revolution, and also at that time we did not have enough information about BJJ even videos to learn the techniques of this amazing martial art.
But in Armenia, we have very good sambo, judo and wrestling schools. So for me, it was a smooth transition, from percussion martial arts to wrestling style. After serving in the army I temporarily stopped practicing martial arts but tried to keep fit with strength training.
In 2010 one of my close friends and martial arts expert Vahan Tadevosyan, with whom we trained since the early nineties, told me that in Moscow he met with representatives of the Gracie Academy and they have a BJJ self-defense online program. So after a long break at the age of 37 with my old friends, with youthful enthusiasm, I put on a white belt and began to study BJJ.
In 2012 we founded the jiu-jitsu national federation and in 2013 invited to Armenia the first jiu-jitsu sensei 3 times world champion  Roberto Atalla, the founder of the Rio Grappling Club.

3.Tell us about the current state of jiu-jitsu in Armenia.

Currently, we have three international clubs in Armenia.  It’s “Rio Grappling Club Armenia”, as mentioned above, “Legacy  BJJ Yerevan team” under my Jiu-Jitsu brother, Professor Alberto Crane, and “Hayastan MMA” under legendary Sensei Gokor Chivichyan.
We organized the first tournament in 2017, in addition to our athletes, we also invited sambists and judokas, instructed them, introduced them to the rules, and then we had about 80 90 participants.
in 2021, together with the UWW Grappling Federation of Armenia, we organized 3 tournaments, about 400 athletes participated in each tournament. According to the results of the tournaments, a national team was assembled. Also since 2015 our athletes have been participating in international competitions and winning medals.
We work with all organizations, clubs, or   Individuals that are interested in the development of sports in our country. We are always open to cooperation. Our friends regularly visit Armenia. I like to especially mention the world-famous champion, our compatriot Edwin Najmi, who often shares his invaluable knowledge.  Professor Aberto Crane, Judo Sensei Joao de Sousa, legendary Sensei and champions coache Gokor Chivichyan , World champion Arin Adjamian and others.
Also recently, at the invitation of the President of Armenia, one of the top athletes of jiu-jitsu all times, Rodger Gracie visited Yerevan to participate in an international conference and conduct seminars.

4.You are the President of Jiu-Jitsu in Armenia, as well as the owner of a gym.  What makes Jiu-Jitsu special for you and what motivates you to keep promoting the sport in your country

I believe that jiu-jitsu is one of the most correct paths for self-development.  I know this from my own experience.  It is an amazing kind of martial art growing all over the world confirms it as extremely positive in all aspects.
As I said earlier, in general, the Armenians are quite successful in various martial arts, the past 10 years of our federation show that Brazilian Jiu-Jitsu has a great future in Armenia.  It has already been proven that our athletes, even after short training sessions, can successfully compete in international tournaments. I believe that in the near future World-class champions from Armenia will appear in international competitions.
After all, this is  a way of life for most of the people who practice BJJ

5. Plans for the future?
One of the priority tasks of the federation is, in the first place, the preparation of the trainer in order to open new schools.
Opening of new schools in various regions of Armenia.
Qualified referees courses.
Prepare  Yerevan Open 2022 tournament in memory of Garik Arevikyan.
Make your own video content with famous athletes and coaches in Armenia and abroad.
Another direction is summer camps.  Armenia is a mountain country, we have beautiful nature with clean air.  Since the time of the Soviet Union, all conditions have been created for camps and training, especially in high-altitude conditions.
Jiu-Jitsu unites nations and different religions, so looking forward to meeting you in Armenia.
Thank you