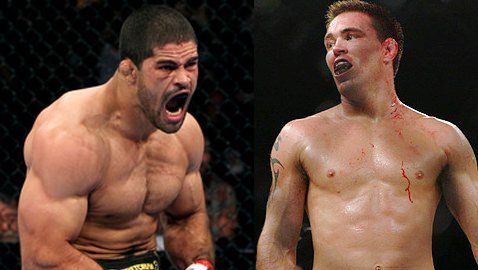 Both Jake Shields and Rousimar Palhares have been tearing up the WSOF since being released from the UFC. They have both won two fights in a row, and they both won those fights by submission. Palhares is currently king of the WSOF welterweight division, but Shields will soon get a crack at his title.

Palhares and Shields have proven that they are still high level fighters, even though the UFC cut them. The submission is something both these men hunt for. Everyone knows that Palhares is going to dive for a leg, yet he STILL manages to submit most of his opponents. The same thing goes for Jake Shields, you know that he is going to try and take you down and work to pass your guard.

We all saw what happened when Jon Fitch got into a grappling exchange with Palhares, it ended quickly. Shields has already said that he wants to “hurt” Palhares when the two fight, but it probably won’t be with his fists. He only has three TKO wins in his career, and the most recent one came in 2006. Shields’ striking has always looked labored and stiff, so I don’t see him winning in the striking department against the more athletic and explosive Palhares.

This fight will more than likely end up on the mat. The question will be whether Shields can survive the leg lock attacks of Palhares. If Shields can manage to avoid all leg lock attempts, much like Alan Belcher did, he has a good chance of winning the fight. Either way, the clash of styles will be very interesting to watch.