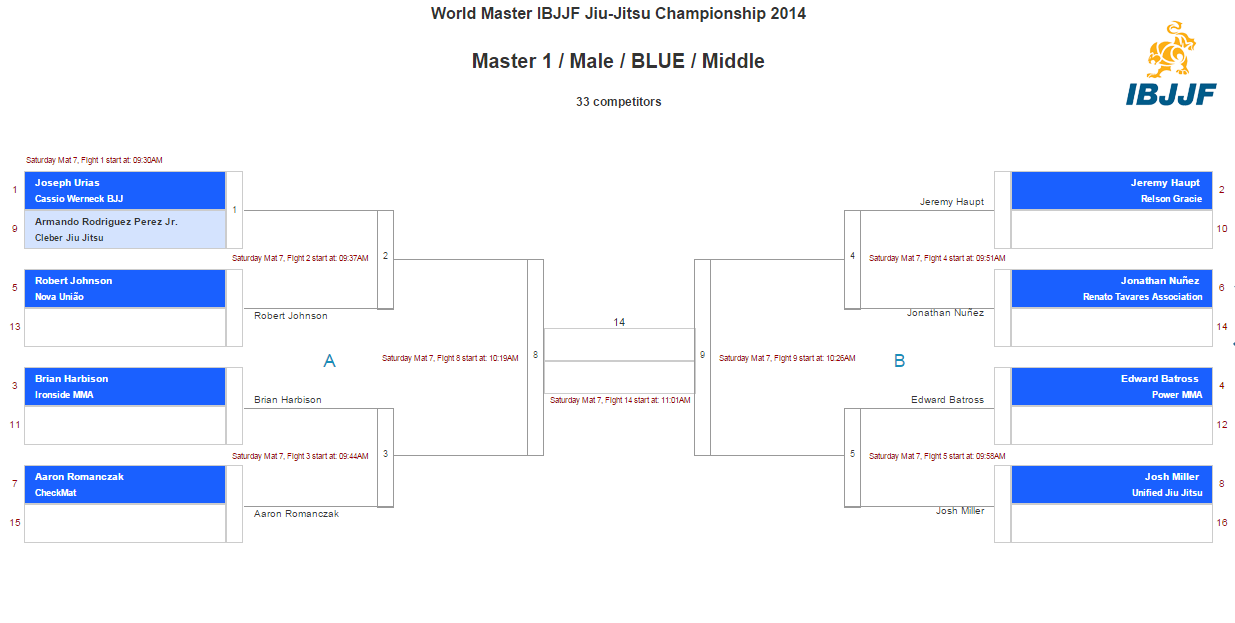 There are two trains of thought when it comes to looking at your bracket for an upcoming tournament. One is to look at the bracket and remove the mystery of who you are facing and how many people are in your bracket. The other is to focus on your game and not worry about who or how many opponents you will be facing.

As a fresh Blue Belt, who only competed as a white belt, I used to look at the competitor list daily and the day the brackets were released was like Christmas morning for me. I will admit, that I googled my opponents and looked at my opponents’ Facebook pages. I looked up the schools they trained at, entered their names on ibjjfrankings.com and searched for any videos of their matches. My stalking actually helped me find out that one of the guys in my bracket at Pans pulled half guard in all of the matches he posted on his Youtube page and I drilled a counter to the half guard pull just in case we faced each other. In another tournament, I was planning on going for a takedown as part of my game plan until I googled my opponent and in his work bio page he mentioned wrestling for his Junior College team. After reading his bio, I decided to pull guard. Looking at the number of competitors in the bracket also helped me mentally prepare for how many matches I will be having that day. I felt like the knowledge I gained from looking at the bracket and looking up my opponents gave me a mental edge since it removed the mystery of who I will be facing and if they were short and stocky or tall and long. When I arrived in the bullpen for weigh-ins, I knew how each opponent looked like and what their favorite movies were based on their Facebook page.

On the flip side is not looking at your first round opponent, competitor list or bracket. Some of my teammates prefer not to see their brackets and they each have their reasons. One successful Blue Belt who has won and placed in numerous tournaments admitted he overanalyzed his opponents in the past when he did look at the brackets. Instead, he prefers to focus on himself and what he has to do at the tournament rather than worry about his opponents. A black belt at my school also prefers not to look at his bracket prior to a tournament. When you reach the brown and black belt level, chances are you could be matched up against a successful, high profile competitor. Knowing that you are squaring off against Andre Galvao or Romulo Barral in the first round can just add to the nerves and pressure of training multiple times a day and weight cutting in the weeks leading up to a major tournament like the Pans or Worlds.

In the end, it comes down to preference and whether or not knowing places a competitor in the best mental state of mind in the days leading up to a competition. There is no right or wrong answer. It just comes down to a person’s perspective of whether the conflict at a tournament is ‘you versus the other competitors’ or ‘you versus yourself.’

What are your thoughts on looking at the competitor lists and brackets prior to a tournament?