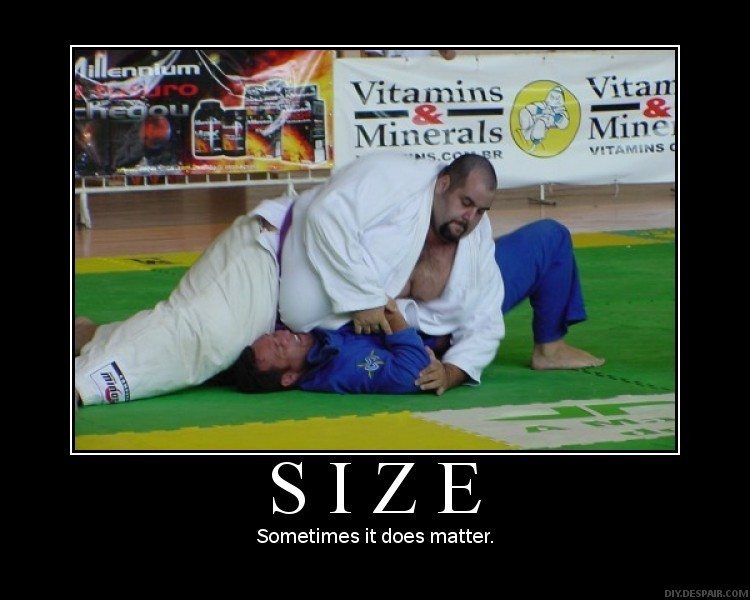 Jiu Jitsu is a martial art which allows its practitioners to overcome larger opponents, assuming the larger opponent is not as skilled. It is in fact so effective that a myth has been perpetuated of size not even mattering. Size, weight and strength all matter. A skilled heavyweight will normally beat an equally skilled smaller practitioner. So the question to ask is how much do weight size and strength actually matter?

A larger opponent has the advantage of being more difficult to move; often having a better base is often able to apply more pressure. In spite of the sport being geared towards “giant killers” a larger person with equal or better skill will likely be able to overcome a smaller opponent. The reality is that size can be a distinct advantage.

There is a counterpoint that can be made, especially in a world in which Rodolfo Vieira was unable to address Rafa Mendes’ guard (look it up.) A smaller person who is remarkably athletic can overcome a larger opponent in spite of the size difference. Also often a smaller athlete can be faster and more agile than a larger athlete which high level Jiu Jitsu practitioners are able to take advantage of.

Relying on strength or size will ultimately yield failure for most grapplers, but supplementing technique with useful physical attributes is a recipe for success. A classic fight between Marcelo Garcia and Ricco Rodriguez will show that very often a larger competitor can be rendered clumsy and ineffective by a smaller competitor with the athleticism needed to manipulate the movement of the bigger competitor.

The key is the distinction between reliance upon and willingness to apply. Application of physical strength is without a question beneficial to a larger practitioner. Needing that strength to win a match will fail that practitioner as soon as they either run into a bigger/stronger opponent or a smaller but more athletic and/or skillful opponent.

Size is not the only factor in Jiu Jitsu, but there’s a reason we haven’t seen a rooster weight absolute world champion. However, we’ve seen lightweights like Leandro Lo do very well. There’s a degree to which size becomes an overwhelming factor amongst skilled competitors and it is very unusual to see a high level heavyweight get beaten by a much smaller competitor. When it does happen, though, it is a spectacle and an example of Jiu Jitsu’s elegance.