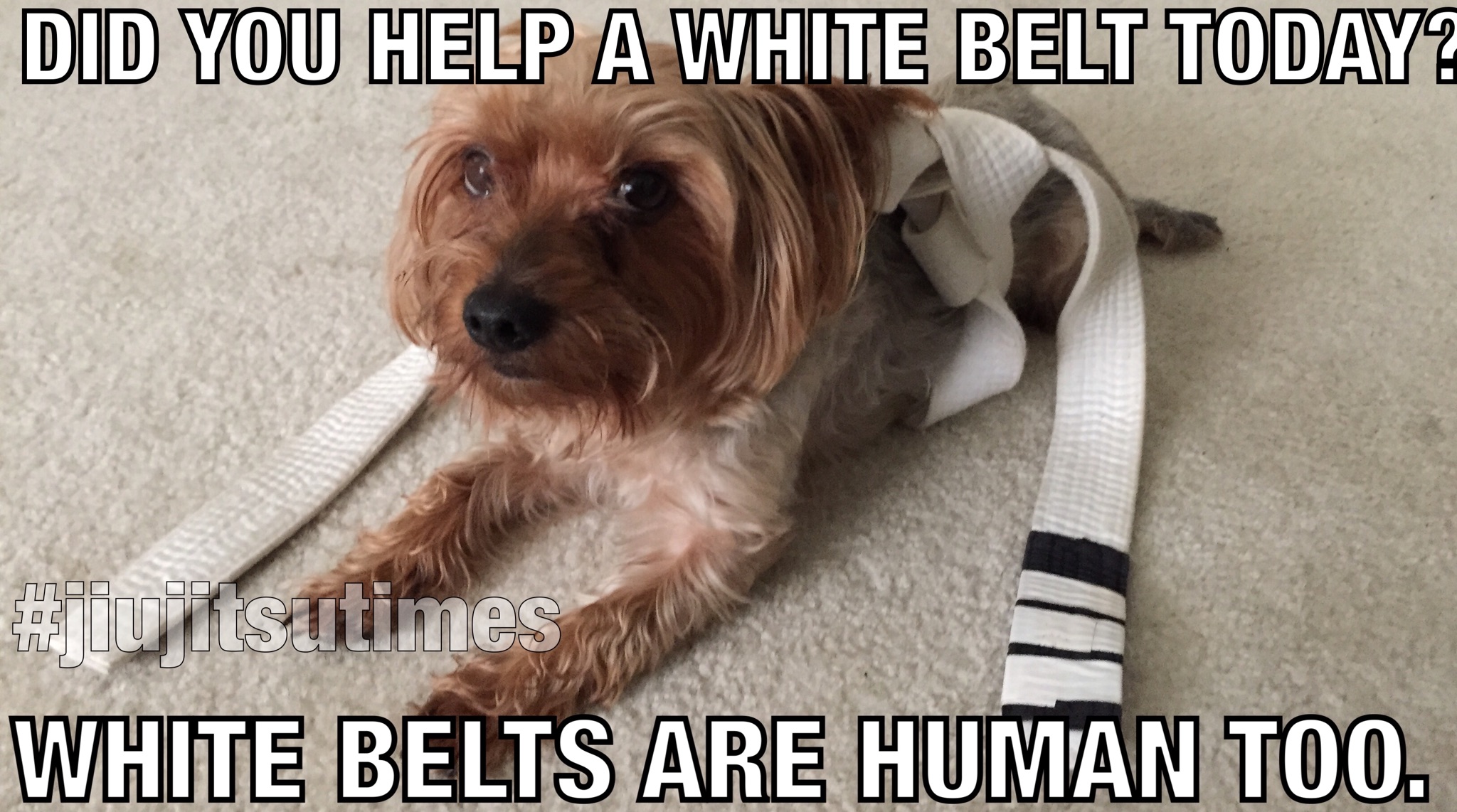 Remember your first day? Allllllllll those years ago? Or maybe not so many years ago, but you’ve excelled at jiu-jitsu and have trained with a fervor that’s unmatched by any other (yes, there’s a hint of sarcasm in there). Perhaps you’d decided to try something new, brought a friend with you for support, or braved the wilds by yourself- whatever the reason behind it you came, you saw, you conquered! Cough cough… well, you signed on the dotted line anyway! And here we all are; training, competing, doing whatever it is that marks our way on this jits journey.
And here we are… the glorious white belt; the fresh gi, the new flip-flops, the sparkly eyes! Killed it, of course. Class was a complete success! I perfected every move (said no white belt, ever) and was smooth as buttaaaaaaah! I even helped that poor sap over there with their technique. That’s right, me, a white belt. I knocked it out of the park! OH CRAP… It’s time to roll. Time to show ‘em what I know!! Sing it with me now,
“Well you can tell everybody
Yeah you can tell everybody
Go ahead and tell everybody
I’m the man I’m the man I’m the man*”
(Insert face-palm here.)

Oh those were the days! HA! Let’s just be honest for a second. We fudged our way thru every class until it started to “click.” We dreaded rolling with this person or that, the one who REALLY made us look like a total jiu-jitsu doofus; isn’t there still that one?! And the thinking process; I can’t wait to do that sic move we’ve been working on all week… you know the one, ummm where my hand is… yeah, no, that doesn’t even make sense. But I can TOTALLY see it in my head so it’s ok. No worries, I’ll be alright. No-one will ever guess that I’m totally sweating this and ready to pee my pants. Please don’t put me with that guy over there please, please, please… aaaand- ugh; I’m doomed. So in keeping with this month’s theme, and to everyone’s delight everywhere, we’ve decided to remind you upper belts what it’s like to be a white belt with, “some things we wish you’d remember about being me” (and not one of them said anything about tapping an upper belt, nope, not a one!)
• I never feel comfortable asking a higher belt to roll. And sit there DYING to be asked!
• Also we white belts never remember the “real” name for things. So when you talk about De la Riva, Rubber Guard, kasakatami we are like, ummmm? What? That thing where you do the knee bend and then hook, move over and ….I forget. Lol.
• I make up my own names for things as well sooo- OuchiCouchi?! Nope ok welllll
• When a higher belt starts showing you two or three variations off a move and you start to get a popsicle headache because you’re grateful and overwhelmed trying to remember it.
• It’s so overwhelming! You know it’s good info but you feel like a mush brain afterwards
• “explain it to me like I’m a potato”
• Are we supposed to wash our belts? I’d like upper belts to know that I don’t know if I’m supposed to wash my belt…and I’m afraid to ask
• No! I really do know that move I just forgot for a second (& then I whisper to someone else that I don’t know the move or ask how to do it later)
• Or I was so nervous I really did know it, but drew a blank!
• I want to roll at open mat but I’m new and intimidated to ask a higher rank… Please ask me… I look lazy holding up the wall… but I’m not I swear, I want to learn!”
• I’m shy (believe it or not) and even now as a blue belt if I’m not that familiar with someone- it can take some working up to ask someone to roll. Now I try to make it a point to ask white belts because I’m sure some other people are the same way.
• I was terrified as a white belt of doing something stupid or wrong that would either cause me to look stupid or hurt somebody
• I was terrified as a white belt of doing something to offend somebody or just be bad etiquette. Looking back now it’s kind of silly since everybody went through that phase, but I felt like, coming in, that people would think I already knew all of the general etiquette things
• That moment when you freeze like a deer caught in the headlights… Just give me one more seeeecond
• Just remind me about the first step…I know the rest I swear!
• Please don’t think I know this. I’m a total idiot. berim-what?
• I am trying
• I want to learn, I am not here to ruin your training
• Your time is as equally important to me… I don’t want to waste time, period
• That moment when an upper belt tells me that I’ve done something really well
• That moment when an upper belt tells me I’m doing something completely wrong
• When different upper belts show you the same move, five different ways, and then you’re tested on it, a SIXTH way
• Realizing that you have NO cardio whatsoever, and the upper belt you’re rolling with knows it and is taking it easy on you is a most humiliating moment
• Um no, I really didn’t know we had bare feet all the time
• OH! We line up by rank? Errrr how does that work again?
• Please have patience, I’m learning. I’ll get there. I’m nervous and trying my best.
• Oh cool, you just tapped me 800 times. I learned nothing from that. Other than you tapped me 800 times. Sweet.
• Don’t use all 4 fingers, they will end up broken
• Don’t ask about stripes, or testing, or stripes
• Basically I should not speak, at all, ever that’s pretty much- awful

Jiu-jitsu is every person’s sport. Truly, anyone can participate, from the very young to the very old; of any ability. The frustration comes from going against the grain, against every natural instinct- your body says push but really you should pull? Say what?! That’s OK, that’s what training, teammates and time is for. It is to the benefit of all to be humble and remember that we all have roots. No-one started at the top, no-one. Gracies didn’t come from the womb wrapped in black belts, Lovato Jr wasn’t handed World’s, Nicollini didn’t lay on the beach, and Keenan didn’t sleep the day away; everyone starts at the beginning. The difference is in what they do with their beginnings; however it’s important to remember that a tree has many branches. Those branches are founded and held strong roots, so consider the white belt the roots of jiu-jitsu. Without roots there would be no beginning, middle or end… nurture and cultivate your white belts so that they can become great training partners and teammates! So remember your roots (the white belts) and cultivate your garden!