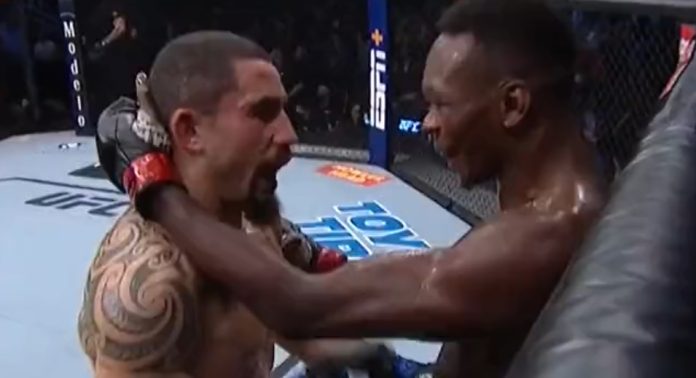 It was business as usual for Israel Adesanya, as he further cemented his place into UFC history with his 4th UFC Middleweight title defense.

Adesanya vs. Whittaker 2 was a bit more competitive than the first installation, with the scorecards giving Adesanya the edge by just a single round. The only round that was absolutely clear for Adesanya was the first. Otherwise, rounds 2-4 could have gone to either fighter, with the 5th round seeming to go in Whittaker’s favor clearly.

Whittaker was able to establish some of his grappling, securing 4 takedowns out of 10 attempts. He secured 3:35 of control time on the ground, but came away with a bruised and battered lead leg and ultimately couldn’t maintain enough momentum to sway the judge’s scorecards.

It’s not common for a champion to call out their next opponent, but Adesanya knows who he wants next and called out Jared Cannonier, who defeated Derek Brunson earlier in the night. Adesanya put the statement out, “if you want it, come get it.”

In the co-main event, Tai Tuivasa KO’d Heavyweight contender Derrick Lewis with a vicious elbow, slumping The Black Beast and knocking him completely unconscious. Earlier in the night, Renato Moicano recorded his 9th submission win and his second-straight RNC finish. In total, there were 4 submission finishes, including Kyler Phillips’ armbar from triangle and Douglas Silva de Andrade’s RNC for an unbelievable comeback win.

Who do you think should leave Houston with the belt? 👑