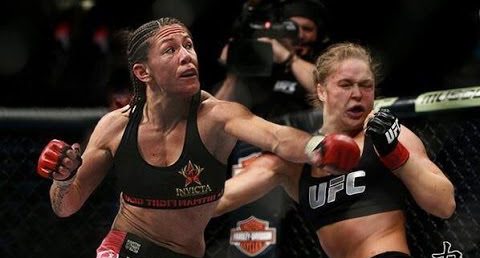 Ronda Rousey’s rise to MMA stardom was swift and brutal. Match after match, the celebrated Olympian proved to be head and shoulders above everybody else. This was most apparent in her last fight with Cat Zingano, a then undefeated knockout artist who she demolished with her signature armbar submission in just 14 seconds. Rousey seemed untouchable with no other challenger left in sight — except the ferocious Cristiane “Cyborg” Justino.

The 29-year old Cyborg is an imposing figure. She is a two-time world champion in Brazilian Jiu Jitsu with an impressive MMA career. Her most memorable fight is a TKO win over Gina Carano wherein her punches overwhelmed the former champion. Fans have been clamoring for a Rousey-Cyborg fight for a while but several road blocks made everyone wonder if it was ever going to happen. Cyborg is currently fighting under Invicta FC.

This seems to have been resolved with her finally signing a contract with the UFC. The deal transpired in late February but was not confirmed by the parties involved until recently. Cyborg made the announcement on social media which was picked up by Brazilian news sites. Dana White, president of the UFC, confirmed it shortly after.

However, the anticipated superfight between the two most dominant women in the sport is unlikely to take place right away. They are both scheduled to face other foes in the coming months. Rousey will defend her bantamweight title against Bethe Correira at UFC190 while Cyborg will defend her featherweight title in July.

The contract also states that Cyborg must come down to 135lb and prove that she can compete in that division at Invicta FC. Only then will she be allowed to fight in the UFC and get the golden ticket. For now, it’s all about building up the hype for what promises to be an explosive encounter.