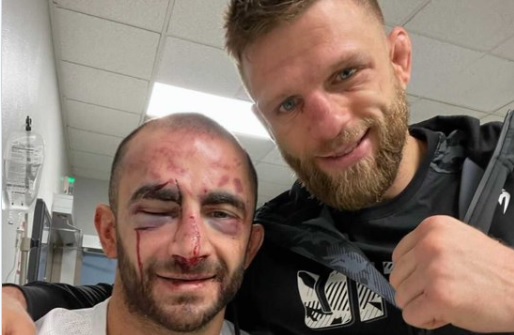 The Main Event of the night was an absolute barn burner, as Calvin Kattar took a Unanimous Decision victory over KingsMMA’s Giga Chikadze, earning a 50-45 on one judge’s score card.

The pair clashed for 5-rounds and earned Fight of the Night with both fighters coming out bloody and battered. Kattar was able to earn the victory and return to the win-column with his performance after losing to Max Holloway in yet another Fight of the Night bout nearly a year ago.

Nothing but respect between warriors 🤝

The only submission of the night came in the 1st-round of the heavyweight co-main event as Jake Collier earned a first round RNC over Chase Sherman, earning him a performance bonus for the night.

The first submission of 2022 locked in by @JakeCollier88 🔒

The only other performance bonus was given to Viacheslav Borschchev for his 1st-round UFC debut KO over Dakota Bush.