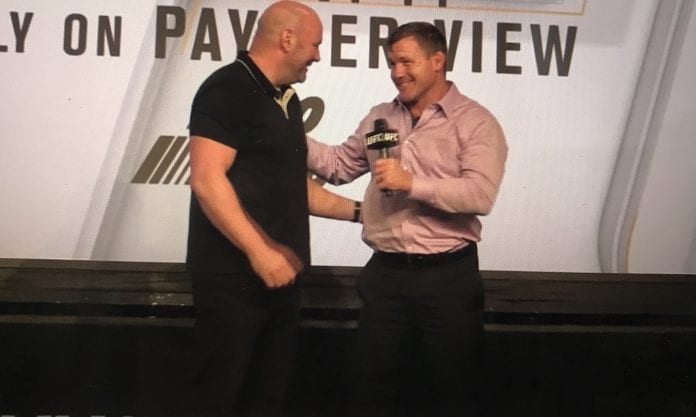 UFC big dog Dana White and Hall of Fame fighter Matt Hughes shared the stage in an emotional public reunion at the unveiling of the mixed martial arts org’s documentary A Country Boy Can Survive. The short film is part of the UFC’s 25th Anniversary rollout of “25 Years in Short,”  a series of twenty-five short features about life within their historic fight community.

A Country Boy Can Survive: The Story of Matt Hughes’ Fight For Survival chronicles the recovery of Hughes following a devastating collision between his truck and a train. The accident, which occurred in June 2017, left Hughes clinging to life an in a coma with severe head trauma.

“I’ve watched it 50 times and I’m about to cry still,” said White, choking up at the press event for UFC 229 where the doc was previewed.

“When that train hit me, Dana called my wife and said ‘Do you need anything?’ [She] could tell he was pretty serious and would do anything to help me and help them,” Hughes said of White.

Hughes made his UFC debut at Fight Night 22 back in 1999, going on to become the welterweight champion in 2001. He was featured as part of The Ultimate Fighter. His post-accident rehabilitation is ongoing.

A Country Boy Can Survive, and all of the other docs featured as part of the UFC anniversary, will be available for streaming via FightPass.