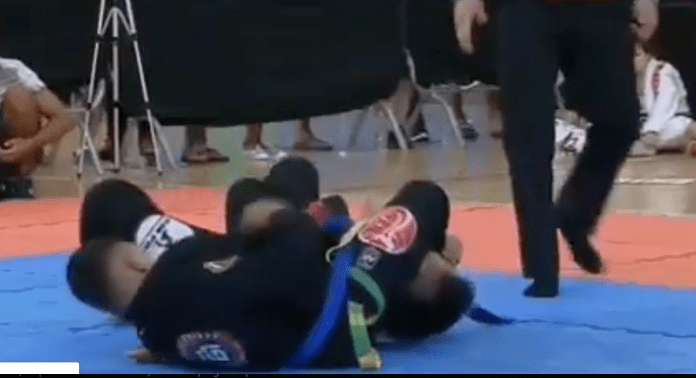 The Orange League, curated to showcase the rising stars of jiu-jitsu, did exactly what it set out to do on January 13th in Sau Paulo, Brazil.

“What is more important, the belt around your waist or the time spent on the mats?” Mayca asked in a pre-fight interview with bjjheroes.com. “In this match, we will have exactly this, because even though they both started training roughly around the same time, one is a black belt, the other a juvenile blue belt.”

To be clear, Galvao is an exceptionally gifted young athlete but he’s not your average teen. An IBJJF Kids Pan champion, he’s the son of black belt Melqui Galvao, has a personal trainer paid for by sponsors, and was selected specifically because he could potentially beat an adult black belt.

“I’ve had plenty of problems with black belts lately,” Mayca said of why he arranged the superfight. “Most only want to compete in super fights, they don’t want to expose themselves in a GP. This is happening a lot. I have been a fan of this kid [Mica] for a while so I put the challenge out there, I wanted to see who is the black belt who has the balls to face a blue belt.” The promotor said only two stepped forward.

Had he won, Rounaud would have earned a spot on the roster for Copa Podio lightweight Grand Prix in Brazil next month.

Mica may or may not have taken Rounaud’s arm apart in the process of winning — it’s not entirely clear in the video: