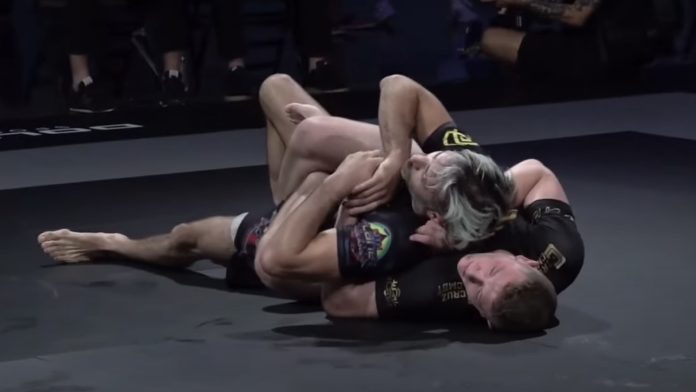 He might be young, but he clearly deserves to compete among the best.

Anyone who watched last weekend’s WNO event was in for an exciting match-up when Cole Abate, a 16-year old Art of Jiu Jitsu blue belt under Gui and Rafael Mendes, shook up the bracket by defeating the top ranked lightweight by unanimous decision.

When Abate gave his pre-fight interview, he felt that he was in a win-win situation,  “[This is] great for me, I feel I have everything to win in this division. I’m only 16-years old and I’m the only blue belt, still a blue belt juvenile.”

Abate came out like a bat out of hell in his match against Freakazoid, aggressive with his leg attacks and continuing to maintain relentless pressure with attacks from every angle. The intensity never stopped throughout the 15-minute round, eventually becoming a slip-n-slide of submission attempts. When time expired, Martinez raised Abate’s hand, acknowledging the stellar performance.

In an instagram post, Abate explained his preparation for the tournament, and noted that his performance was confirmation that his hard work is paying off,

my first match at the WNO event was against geo martinez, the first high-level black belt i’ve faced in competition. he is a competitor who has wins over some of the best in the sport in my current weight division and someone who i have much respect. I knew it would be a great first-round matchup to analyze myself with the level of the rest of the athletes in the bracket.

the mindset was to showcase a new skill i’ve been working on for the past few months: leg attacks. we wanted to come to this competition with a different game to show people a new version of my jiu jitsu without the gi. for that to happen i had been studying a lot footage outside of the training i was already doing at the academy, every night I would spend hours watching and learning with my dad at home. the next day i would try to apply the techniques in specific training and sparring until i felt they were effective and fit well with my game. doing so allowed me to evolve fast and increased my confidence.

in this match, the approach my professor and i planned was to lead the pace of the fight using leg entries. this strategy allowed me to lock multiple tight submission attempts and reach dominant positions.

the next day after the competition i was back to my regular routine, training, teaching and studying – this competition gave me the confirmation i wanted that my work has been paying off and getting to where i want to be is just a matter of time and dedication.

Abate, Fluent in Portuguese without ever living in Brazil, barely missed the finals as he lost his next match via split decision to Gabriel Sousa. He leads a wave of young prospects who are bringing the next generation into the game. In the same event, 16-year old Trinity Pun made it to the finals in the women’s 115 lb bracket.

The new school of jiujiteiros are here, making a statement loud and clear.