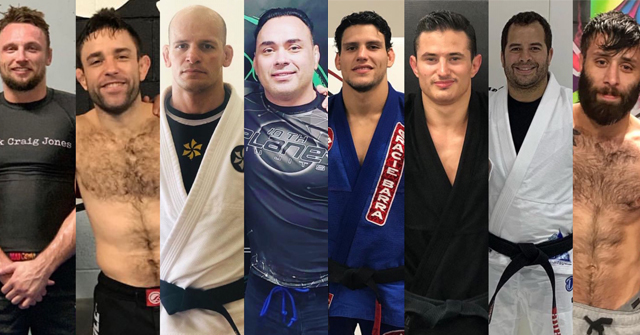 In the weave of a high-end music festival, the 2nd annual No-Gi Freak Summit at 10th Planet San Diego brought eight A-list world-renowned jiu-jitsu instructors for 22 hours worth of seminars over the course of this past weekend. What began as a concept a little more than a year ago has turned into a perennially successful sold-out gathering packing the mats of 10th Planet San Diego to the brim.

“I wanted to train with my favorite grapplers in one weekend,” says 10th Planet San Diego Head Coach Richie Martinez. “Sometimes it’s really hard to do because of scheduling but when all the stars aligned it was a perfect time, perfect scenario. They all were able to schedule the same weekend to be out here.”

Eddie Bravo kicked off the festivities as the first professor to teach. The excitement from many of the students set the tone for the weekend as some students were visibly happy to just see Eddie in person, secondarily concerned with what lesson he had in store. The opening half of his seminar was not unlike that of one of his frequent appearances on the Joe Rogan Experience, discussing topics ranging from the UFC and his coaching of Tony Ferguson to astronomy. Eddie went on to share an armbar variation from his signature rubber guard that he calls the “Mexican Dead Orchard”, a setup that takes a slight detour from his ‘Muddy Waters’ path. What’s unique about the rubber guard is that despite it relying somewhat on flexibility, there are angles to be aware of that make the transitions easier and queues to take advantage of that make the position significantly easier. Eddie would go on to expand on twister side control, emphasizing the patience and hand positioning to maintain the position before thinking about any submission or transition attempt.

Xande Ribeiro came in well-equipped with a balanced lesson plan, incorporating basic components of guard retention, side mount escapes, and mount escapes into a lineup of high-level jiu-jitsu artists that are sure to compensate with their own brand of offensive firepower. Xande emphasized the idea of moving ones body closer or away from the opponent based on appropriate mechanics, emphasizing ‘elegance’ in one’s movements and reacting to your opponent’s intentions. He was extremely hands-on, pulling random students up to demonstrate points of his and answering every question thoroughly. He brings very much a self-defense approach to his style, being one of the more old-school styles at the summit. He was as personable as one could be giving a seminar, drawing references from different styles and continuously expanding on the self-preservation component of his jiu-jitsu, citing it as the most important aspect one must be aware of as they continue their jiu-jitsu journey.

The next morning, Ryan Hall took the focus to a different avenue. In discussing his heel hook victory over BJ Penn at UFC 232, he made mention of the fact that approaching the fight from a traditional jiu-jitsu perspective would not work to his advantage. BJ is too well-versed in classical jiu-jitsu for there to be a reasonable expectation that Hall would be able to take his back and choke him out. By utilizing subtle feints on his feet, he could draw the fight into an area that he felt he would hold more of an advantage, that of his patented 50/50 heel hook realm via an Iminari roll. Much of the seminar focused on the hard-wired mechanics, points of contact, and distance management details that make his game work. What stood out most to many is the fact that in traditional ashi garami from the bottom, Hall put the majority of the onus of responsibility in terms of keeping the top guys weight off you on the top leg. The bottom leg is “not as important as advertised”, giving it the freedom to achieve another point of contact without the weighted responsibility of maintaining the position. Hall is scheduled to fight Darren Elkins on July 13 at UFC on ESPN+.

As the seminar series drew to the it’s midway point, the brother’s Martinez stepped up to the helm. For anyone familiar with the Lollapalooza brand of music festivals, consider the brother’s the Perry Farrell of the Freak Summit. Just as Farrell has made himself a consistent part of his festival, not merely because it is his brainchild but also with respect to their legitimacy to the craft, the brother’s stand in their own right amongst a dream list of A-listers that they assembled for the weekend. Richie encouraged attendees to look at everyone as having unique perspectives on the same art, and pointed to several black belts in attendance as students as evidence that we always have something to learn and never stop growing. He shared his staple omoplata and carni armlock expounding that flexibility is overstated in an effective rubber guard compared to proper angles and body positioning. Geo took over shortly after and shared his newest development; a De La Riva and X-guard variation with dogfight elements connecting it to the twister and truck game. As the masterminds behind the concept, they are committed to growing the summit every year and certainly back that up with high-level discussions of their unique styles of play.

“Last year when we did it [Geo and I] weren’t going to do our seminars,” says Richie. “It’s kind of weird doing a seminar at your own school, it sounds awkward. We saw that there were a lot of people from different countries and different states coming out that never get to train with us. We felt that it would be kind of cool to give our perspectives as well, especially since a lot of these guys never get to train with us and they come here kind of for us in a way.”

Craig Jones came on in the eve of the Saturday session much to the anticipation from the leg lock savvy 10th Planet crowd. Right away he jumps into a discussion on the proper finishing mechanics of the heel hook. His main concern in locking up the 4-11 position is restricting the directional mobility of his opponents hips, making sure that his opponents knee is pointing towards the ceiling as he applies torque pressure. He answered questions related to his Z-guard, rolled with several of the students, and attended each of the other two Saturday seminars as a student himself, drilling on the sidelines and observing. The handwork on his leg lock game was concise and clean, with no fat on it. The three hour session was ripe with laughter and candid discussion as the laid-back nature of Jones would breed a spirited discussion on lower body attacks. He went around answering everyone’s questions, letting them feel the destructive capabilities that he has become famous for. Needless to say, the highlight came near the end when one male student raised their hand and asked “Craig, I’m having trouble with bigger guys…” to which Jones quipped, “I don’t want to hear about your love life, mate.” As had become fairly common throughout the weekend, the room erupted with raucous laughter.

Renowned Checkmat Head Coach Leo Vieira kicked off the Sunday festivities with a guard-passing seminar many have since dubbed as their favorite seminar of the summit. He stressed that from a strategic standpoint in a competition setting, one must take inventory of their skills relative to their opponent’s and plan accordingly. Generally, he states, you ought to have one distinct advantage over your opponent, either being faster or stronger than them. Managing ones emotions before competition was another big topic of discussion. With over 35 years involved in the sport, Leo stated that he would become incredibly nervous as a teenager when competing. Over time, he forced himself to develop a different perspective to see it more as a fun outlet as he felt that this type of negative thinking only served to hinder his short term and long term goals. From a technical standpoint, he funneled his guard passing to get the opponent on their side while lying back, emphasizing that if an opponent is sitting up we must fight their hands and if an opponent is sitting back we must fight their feet. He is careful not to expose his own feet as he approaches a guard pass, keeping his arms in front of his knees at all times.

As Leo wrapped up his Q&A session, staying significantly longer than his scheduled time, Geo introduced Caio Terra almost immediately after. What stands out in Geo’s introduction is that he claims to know everything about Caio’s game just from playing the Fortnite video game with him. He discussed how Caio builds structures very concisely and it is visually transferable to his jiu-jitsu game. Caio taught a variation of he DeLaRiva open guard known to some as Mantis Guard, a guard he claims gives him great leverage on the bottom even against stronger, bigger opponents. Amusing throughout was the fact that as Caio used Geo for many of the demonstrations, he only referred to Geo as ‘Freak’, given Geo’s nickname ‘Freakahzoid’ as well as his similarly titled gamer tag. Caio is a stickler for details, concisely calling out any errors he saw students make. He was arguably the most detail oriented professor, not sugarcoating any mistake he witnessed. One can not argue with the results as he is a 10x No-Gi World Champion.

Felipe Pena rounded out the seminars as the main event. As arguably the best grappler in the world right now, having dethroned Gordon Ryan on more than one occasion, you could hear a pin drop as he demonstrated technique given the intense focus of everyone in the room. He was the only seminar to ban video, which in hindsight gave the seminar the ‘exclusive’ feel you only get from the main act. His seminar connected well with Caio’s, they both worked DeLaRiva options from open guard. Pena showed a sweep when the opponent is trying to clear off the DeLaRiva hook with one hand, a sickle-sweep aka cross-sweep variation that takes advantage of the weight shift of the opponent. He indulged the crowd with some of his signature back takes, including the precise mechanism with which he was able to submit Gordon Ryan. In defending Ryan’s heel hooks, Pena reiterated the importance of the angle of your ankle in fending off heel exposure. Once an opponent turns belly down, there is a window to escape the position and take the back, which is the exact sequence that had many at the seminar buzzing.

As the weekend came to a close, excitement already began to build for next year as Richie gave a teaser stating that literally no one is off-limits in their pursuit for what they hope will continue to be the “Coachella for Jiu-Jitsu.”