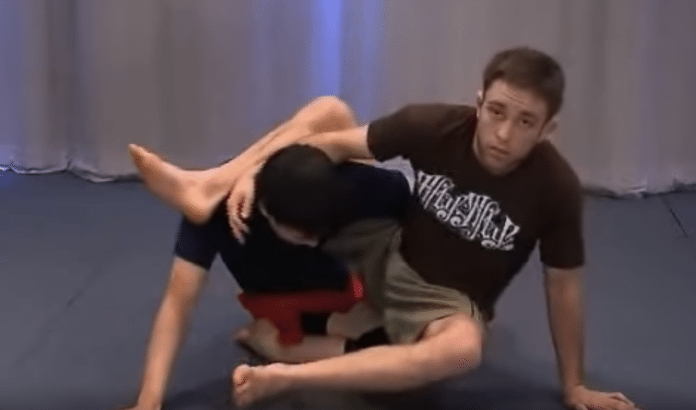 Most students of jiu-jitsu learn the triangle attack from the guard which is the most popular way to attack the triangle.

Once you learn the basics principles of the triangle choke, you can look to catch the submission from many different setups, entries and positions.

Here are 5 Triangle Choke Entries that you can try:

1) Hip Bump Sweep to Triangle
Ryan Hall became famous for submitting opponents in tournaments with the triangle.
Here is a great tricky entry to catch your opponent when they counter your sweep.

2) Triangle from the mount
If your opponent makes the mistake of trying to escape your mount with one arm inside your legs they are open to this technique.
You can also step over to isolate the head and arm.

3) Triangle from rear mount
Kurt Osiander shows how to attack the triangle from the back when your opponent stops your other attacks.

4) Inverted triangle from bottom side control
This submission breaks one of the rules of bjj that says you can not submit from a defensive position.
You can catch your opponent completely by surprise!

5) Overhook setup from the guard
Without gi grips, your spider guard triangle setup disappears.
Here is how to use the overhook to setup a great no-gi triangle attack from the bottom.

on Jiu-jitsu Times: The Most Important 6 Submissions that White Belts Should Learn in Bjj

What is your favorite setup for the triangle choke?