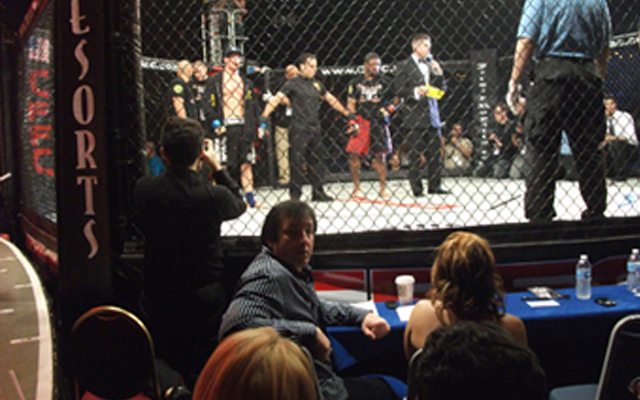 It has been reported that the Cage Fury Fighting Championships will have a separate group of judges score their fights from a soundproof room during their event. The scores these judges give will be compared with the scores that the actual judges give. The New Jersey State Athletic Control Board will take this data and use it for future reference. While I agree that all judging should be done this way in the future, it will not solve the problem of bad judging in MMA. The only way to improve judging is to educate the judges. Even though it’s 2015, a lot of judges still seem confused when it comes to grappling.

It is very easy to judge a fight when one athlete is beating the crap out of the using striking, but it is harder when it comes to the ground. You have to be educated to understand what is going on when the fight hits the mat. It seems that a lot of judges categorize effective grappling as simply being on top. Those of us who practice and compete in submission grappling know that this is not true. If knocking an opponent down with strikes is such a big deal, how come locking up a tight submission is not looked at the same way? Both are ways to finish a fight, but it is easier to see powerful strikes land than it is to see a tight submission locked up.

All judges should really be taking BJJ classes. This would be a great way to educate them about grappling. Obviously there are other grappling styles, but BJJ would be a good place for them to start. I know that there are some retired fighters who are judges, which is good, as long as they aren’t judging a fight that includes a friend or training partner. These judges really need hands on experience so they can judge a fight accurately.

Grappling is not the only place where judges struggle. The stand-up department has also managed to befuddle them. Go watch the Martin Kampmann vs Diego Sanchez fight, or more recently the Michael Johnson vs Beneil Dariush fight. If one opponent is not clearly winning, the judging goes to hell. Judges confuse motion with action. Sanchez has a wild style where he throws tons of strikes and moves forward. To the uneducated eye, it looks like he is winning the fight. But, this is not effective striking. Dariush threw many leg kicks, but Johnson landed more often and with more effective strikes. Kicks use a lot of motion, which seemed to throw the judges off in that fight. Again, they really need to put these judges in a gym. They shouldn’t have to spar or anything, but the basics of striking and grappling are best learned when actually practiced. Getting the judges to watch the fights on a screen in a soundproof room is a step in the right direction, but hopefully more will be done to improve judging in MMA.