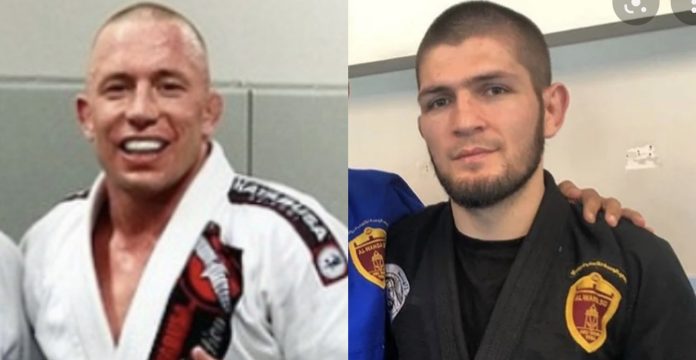 When talking about the GOAT of MMA, two names are always in the discussion: Georges St-Pierre and Khabib Nurmagomedov.

Khabib Nurmagomedov reigned over the Lightweight division and GSP at Welterweight division during their respective eras and are perhaps two of the most dominant grapplers and impeccable strategists in MMA history. Since GSP always maintained his fitness and was able to win the welterweight title after a few years away from fighting, there has always been discussion about a potential return by GSP to challenge Khabib. Unfortunately, it’s become clear that we’ll never get to see that match-up.

However, in a recent interview with MMA news, GSP was asked about his willingness to participate in a potential grappling match against Khabib Nurmagomedov, and GSP seemed to be open to the possibility.

“If it’s well-organized…you know, if there’s some event that is well-organized, that is a novelty fight, something good, maybe. Why not? I’m still in the entertainment world. I’m in great shape. I train still like a professional athlete. I still get it. You know what I mean? Even some of the guys sometimes, they tell me, ‘Hey, are you preparing a comeback?’ I’m like, ‘No, I’m 40 years old. I’m done.’ I just like to stay in there and keep my head in the game.”

GSP retired from MMA in 2017 after defeating Michael Bisping via Rear Naked Choke at UFC 217 for the UFC Middleweight World Championship. Before that, the last time he had fought was 4 years ago, a controversial decision victory over Johny Hendricks where GSP took significant damage. Before officially retiring, Pierre was struggling with health problems and stress from fighting.

Khabib hasn’t fought since defeating Justin Gaethje by Triangle Choke at UFC 254 for the UFC Lightweight World Championship. He expressed that his retirement was due to his father’s death, and that he had promised his mother that he wouldn’t fight any longer. Since retiring, he has established a new MMA promotion, Eagle Fighting Championship.

A grappling match-up between the two legends would definitely gather tons of viewership. After this interview, I would be surprised if promotions don’t start making offers to the pair. Of course, the price to book them won’t be cheap, but if they’re on the right card and accompanied by the right marketing strategy, there should be potential for major profit to be made for all parties.