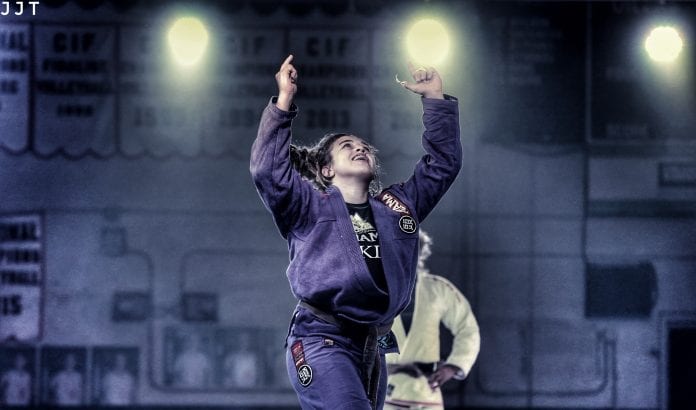 “Some people find their vocation early in life,” writes Catherine Fuhro Perret underneath an Insta-posted portait of herself, beaming and sweaty, in a soaked-through gi. At just 28, the globe-trotting Brazilian and competitive jiu-jitsu black belt radiates the kind of joy one associates with turning a passion into a career in nearly every photo that isn’t her taking apart limbs or gritting teeth on international competition mats. Huge smile, hair askew, sometimes strapped to snowboards or rocking flat brims on the beach, she’s a walking billboard for the next generation of the #jiujitsulifestyle…with a growing collection of serious medals on her wall. Now a Checkmat HQ staple–she runs the school’s youth program–she earned her black belt under Leonardo Vieira and counts the IBJJF 2018 No-Gi championship, IBJJF 2017 World championship, 2017 brown belt Pans championship, and 2016 Pans No-Gi championship among her numerous wins. We caught up with Perret the day before her CBD Invitational matchup for a quick “getting to know you” with one of the community’s fastest rising stars.

What’s your favorite way to train your body/mind that ISN’T jiu-jitsu?

Outside of training BJJ I love to strength train and mix in some conditioning, and the daily challenges it brings. To clear my mind I skateboard by the ocean.

What is one thing every jiu-jitsu student should do off the mats/outside of the gym in order to be a better practitioner?

A good diet and drinking a lot of water will help your training and allows the body to recover.

I love training wrestling and takedowns! I feel like this is overlooked in modern jiu-jitsu.

If you could watch a dream matchup of any two jiu-jitsu fighters living or dead, who would you like to see fight?

Fernando Terere vs Lucas Lepri would be an amazing match! Both are technical and explosive, and have bottom and top game. I think Terere has the X-factor you can’t plan for and would eventually win the match.

Who is your toughest opponent on the competition circuit right now?

Every girl in my division has the ability to win at any time. If you make the smallest mistake at black belt your opponent will capitalize and make you pay.

What fighter in the jiu-jitsu community today inspires you the most and why?

Leo and Rico Vieira inspire me everyday. Both are old school but continue to evolve with the game of jiu-jitsu.

What do you think about the Federation ruling that only black belts can teach?

I agree with this. I believe other ranks can be assistant instructors and learn how to teach classes properly. Teaching jiu-jitsu is not just about showing a move or moves, it’s about passing on the respect and knowledge from the great masters.

What is the biggest difference between BJJ culture in Brazil vs. the United States?

Why did you choose Checkmat as your home gym here in the states?

I met Rico Vieira in Portugal at Euros and ran into him again at the Brazilian Nationals. He opened the doors for me at Fight Zone in Rio. The rest is history. Checkmat is like my family. They offers a great training environment with great training partners and world class instructors.

What is your favorite thing to teach?

How to make a Brazilian BBQ, meat, pineapple, and garlic bread! And I love to teach passing the guard.

What has your experience as a professional in BJJ been like so far?

I have made so many friends all over the world from jiu-jitsu. Some of my training partners have become like brothers and sisters to me. I feel the same energy and respect you put out there you will get in return.

What do you feel needs to happen to allow BJJ to become as welcoming for women as it is for men?

I think if women continue to go out there and fight hard, things will continue to change. Already we see some events paying equally! But I think the Federations are the ones that can help break the cycle by showing the same value in athletes regardless of sex.

How do you feel about IBJJF not paying top winners of major competitions?

I feel like the Absolute champions should be compensated in some way at the major events [like] Pans, Worlds, Euros and Brazilian Nationals. The normal opens there should be no payout.

Have you ever had to use BJJ “off the mats” altercation?

I’m thankful I have never had to use my jiu-jitsu off the mats! Fighting should always be the last resort in any situation.

What is the best piece of advice you’ve ever received about BJJ?

Never give up! In jiu-jitsu, or in life.

What is something you are terrible at?

I don’t allow myself to bad at anything! I just practice until I’m not terrible at them, lol.

Khabib! He is a about respect and the martial arts. He doesn’t talk much, and just goes out there and smashes people and shows them respect. 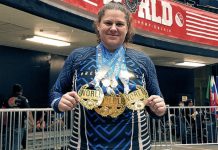 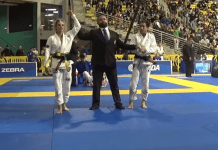 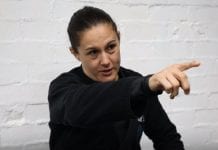 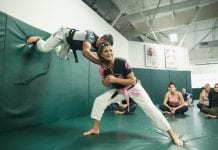 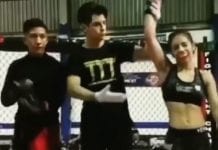 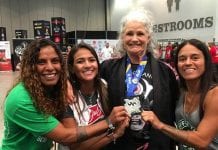 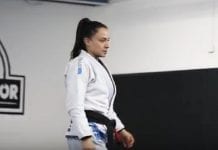 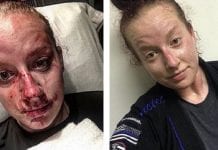 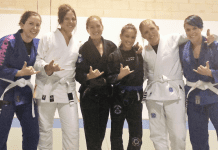 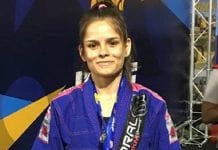 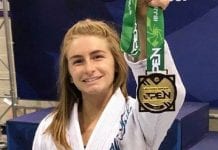