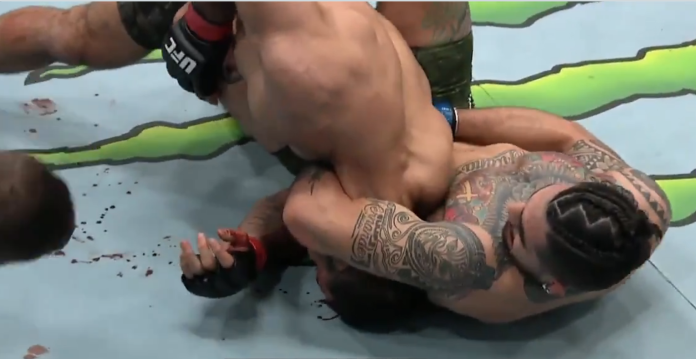 Perhaps one of the most shocking submissions of the 2021 has now earned the title ‘Submission of the Year’ from Ariel Helwani and ‘The MMA Hour’.

In February of 2021 at UFC 258, Anthony Hernandez earned a Performance of the Night bonus when he submitted Rodolfo Vieira late in the 2nd round via arm-in guillotine. The fight’s outcome was completely unexpected as Vieira came in as a -470 favorite, and the odds of Hernandez winning by submissions sat at +3000. The loss also marked the first time an ADCC World Champion was submitted in the UFC.

Vieira started the fight well, bringing it to the ground and attacking submissions right from the start. Hernandez was able to survive long enough to get back to his feet, at which point he started chipping away at Vieira with powerful and accurate strikes. By the end of round 1, Vieira was completely gassed out and had taken a lot of damage. Round 2 wasn’t any better for Vieira and resulted in more shots to the head until Hernandez locked an arm-in guillotine, sat into guard, and got the tap.