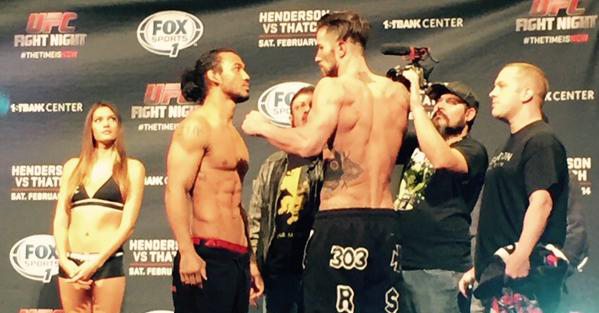 Saturday night, Benson Henderson moved up a weight class to face off against Brandon Thatch. Thatch was 2-0 in the UFC, with both victories coming by way of first round knockout. Henderson had dropped his two previous contests, and took this fight on short notice. The size difference between these two was evident during the weigh-ins. Thatch’s 6’2” frame towered over Henderson during the stare down.

When they both stepped into the octagon, Thatch looked like a middleweight. The size difference was pronounced during the first two rounds of the fight. Thatch was tagging Henderson with hard shots, and was able to throw him to the ground with ease. He was by no means dominating Henderson through the first two rounds, but he was winning pretty easily. Then, came the third round. Henderson was able to secure a takedown against Thatch, and he absolutely dominated the round.

Henderson’s back control was impeccable as he spent most of the round in dominant position. Thatch’s cardio seemed to fade in the later rounds, which was big trouble against someone like Henderson. A perfectly timed double leg in the fourth round spelled the beginning of the end for Thatch. Henderson once again found himself on Thatch’s back. This time, he was able to lock in a rear naked choke.

Sure, size can be an advantage, but not this time. Henderson, who cut no weight, looked fresh throughout the entire fight. Thatch looked considerably tired towards the end of the fight, and once the fight hit the mat, Thatch looked helpless. Benson sliced through his guard with ease, and consistently took his back. This proves, yet again, that grappling is a very integral part of MMA. Sometimes it’s not the size of the dog in the fight, but the size of the fight in the dog!