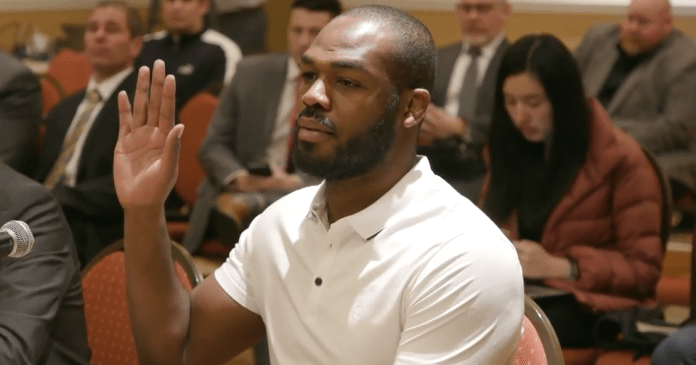 The incident occurred on Friday morning at 5:45 a.m. in Las Vegas, Nevada. Las Vegas Metro PD informed reporters that the charges are domestic battery and injuring or tampering a vehicle with $5,000+ damage.

His bail is set at $8,000 and he is on a 12-hour hold. Details are still developing and the victim has not yet been named.

Jones’ arrest came just hours after he was honored into the UFC Hall of Fame for his UFC 165 Title Fight against Alexander Gustaffson. Included in Jones’ 7-minute acceptance speech was a thank you to his fiancè. “She is the mother of my children, she is my future wife, she is my nutritionist, my security guard, my- I mean, she does it all… She handles all types of situations. Without that women, who knows where I’d be.”

He also updated the crowd on his journey to the heavyweight decision. “I’ve been working so hard guys. Right now I weigh about 250 lbs. My goal is to get up to 270. I wanna like, make Francis [Ngannou] look small. That’s gonna be tough to do.”

Jones is notorious for his issues with the law. His RAP sheet includes a 2012 DUI, a 2015 hit and run, a 2019 guilty plea for assaulting a waitress, and a 2020 arrest for DUI, open container, negligent use of a firearm, and no proof of insurance.