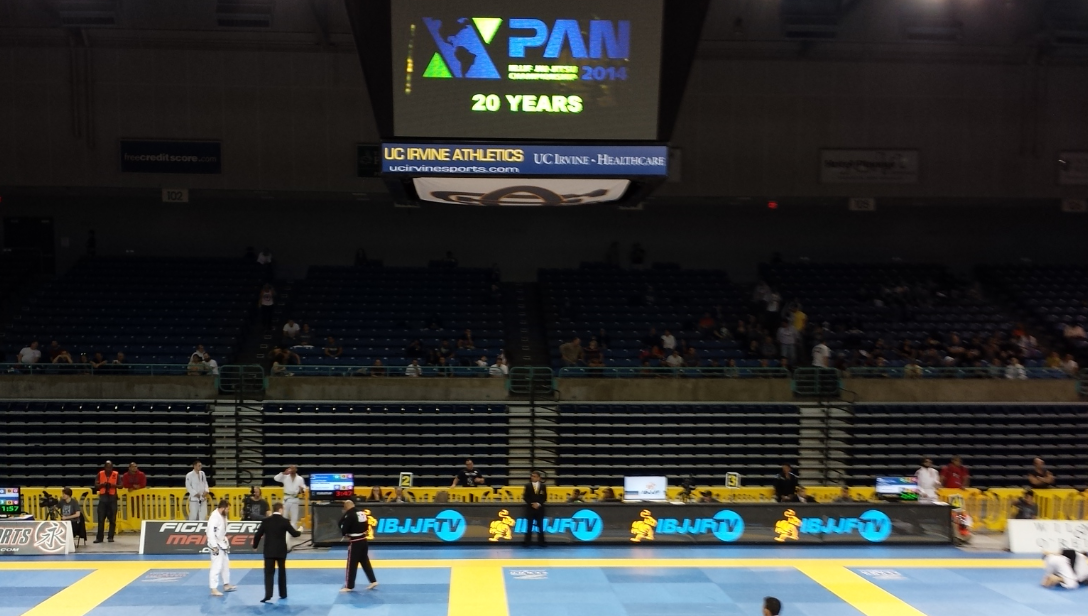 With the IBJJF European Open concluded, the attention has now witched to the Pans, which takes place from March 11th to March 15th at the Bren Event Center on the Campus of UC-Irvine. In the BJJ community, the European Open, Pans, Worlds, and Brazlian Nationals are considered the IBJJF Grand Slam tournaments that attract competitors of all levels from around the world. The event is as much a convention for coaches and competitors of all levels in the sport as much as it is a competition.

While many competitors need to save up money, raise funds, and find sponsors to pay for airfare, hotel, and other costs associated to making the trip to Southern California in order to compete at Pans, competitors based in Southern California are able to just request a day off from school or work to enter one of the top competitions in the world in a 5,000 seat arena. Before the big week at Pans, all of the competitors sacrifice and put in many grueling hours of training and competing in order to prepare and  to place themselves in the best position to win their division.

BJJ is no different than Golf or Tennis in the need to compete in warm up events prior to a Grand Slam event. Competing in local tournaments is an essential part of preparing for a Grand Slam event like the Pans. The local warm up tournaments gives competitors the opportunities to mentally prepare for the emotions of competing in the New Year. These tournaments also provide a chance to test out and refine a game plan leading up to Pans. While the goal of the warm up competitions is to win, the goal should also be to get comfortable competing and learn from these warm-up experiences. In 2013, one of my teammates entered 2 warm-up tournaments and lost in the first round of both tournaments. However, he used what he learned from these two experiences to make a run to the Finals of Pans in the Blue Belt Senior division for a Second Place finish.

In Southern California, there are a series of competitions that have already kicked off the “Road to Pans.” In just the month of January, there has already been Rigan Machado’s JJWL,Dream’s Baddest Blue Gi Tournament and the NABJJF All-Americas Tournament. Within the month of February, there are a number of tournaments in Southern California and the west coast region that competitors can use as warm up tournaments.

Here is a quick list of tournaments, dates, and links for several upcoming tournaments.

Dream BJJ Baddest Blue NoGi Tournament- February 22nd at New Breed Academy – Info might not be up yet, but Travis Newaza has announced it.

If you live in another part of the USA or World, I would highly recommend asking your coach and peers about upcoming tournaments during the month of February that you can use as a warm-up and test run for Pans. Good luck to all of the competitors getting ready for Pans.