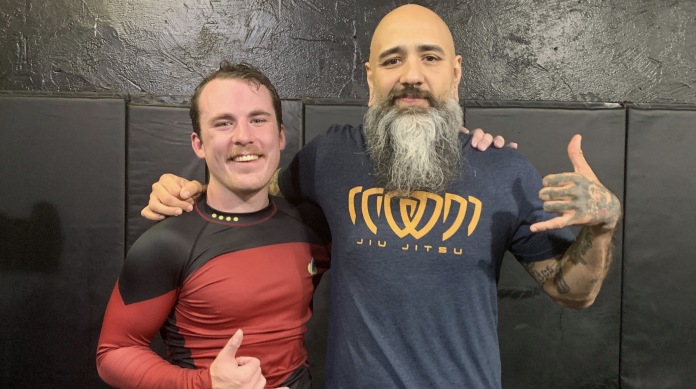 The grappling world is not short on colorful characters. We’re a community full of castaways and misfit toys that try to kill one another every week. We often disagree on what clothes to wear during pitched combat, and yes, some of us smoke a bit too much weed. But no matter how wacky we may appear, we can still wreck your *** harder than three-day-old Taco Bell.

Case in point, two months ago I got the chance to train at 10th Planet San Diego, run by the incomparable Richie “Boogeyman” Martinez alongside brother Geo “Freakahzoid” Martinez. Lovingly referred to as “The Freak Show,” Boogey has assembled a murderer’s row of oddballs who couldn’t be more polite. With the current state of the planet, those connections formed on the mat are more important than ever before. Our sport binds us all together such that a guy can show up to a place thousands of miles away and be treated like family. Not all of us can travel safely, which sucks because traveling to new gyms and meeting new people is one of the best parts of BJJ. So here’s a written account of my trip to the Freak Show.

First off, the gym looks absolutely sick. A short entry hallway opens up to a large striking/strength training area complete with a big ring for all the punchy boys and girls. But punching scares me so let’s skip that area!

A little shoe storage area with stairs leads to the main attraction, the mats.

A truly expansive room covered in black and gray, the grappling area is also blessed with several large open air windows to ventilate the space. Vibrant chatter fills the air, the sign of a class full to capacity. Rash guard-clad athletes flood the room, exchanging jokes and stories before the practice starts.

I enjoy my time getting to know the other students. Unsure of any gym the first time around, being greeted with such open arms was a true delight given the global state of affairs. Plus having a class that large was something I hadn’t experienced since well before the pandemic.

Soon Boogey joined the group and mingled before spotting me. “Hey bro, you made it!” Boogey yelled as he made his way over. No mater what you think, the man IS actually as nice as he appears on line. Maybe nicer.

Now I’d assumed that this would be a regular BJJ class. Warm up, go over some drills, roll, bow out. Big dumb move on my part.

I’d lucked into the “lose five pounds in sweat” competition class for people who are actually good at bjj. You start off on someone’s back and have a minute to submit them, afterwards you switch and have a minute to escape. Then you change partners and go to armbar sub/ escapes, followed by butterfly hook pass/sweep. Sounds pretty doable, right?

You do this for an hour. Then you roll.

At one point I assure you I was in pretty good shape. I was prepping for a tournament, my diet was on point and I was doing pull ups often enough. But that was the cooler, pre-pandemic Kevin and he didn’t survive past month four. Current, doughy Kevin has about six minutes of usable grappling before it’s blackout time.

The first round went alright, I was partnered with a guy named Dave and we had roughly the same amount of training. My usual escapes worked, and I even landed some subs from the back. I came away thinking “Hey, maybe I’m ok at jiu-jitsu? Take that, every coach I’ve ever had!”

One round with a competition rooster weight quickly fixed that. Every defense I had was blown through like tissue paper, and attacking felt like picking the lock on Fort Knox. Going into round three my grips were already gassed. Luckily I only had… over 50 minutes left.

It was ruthless. A room full of maniacs was slowly ripping me up and it was all I could do to hold on for my life. But one of the things that kept me in it was how plain sweet everyone was! No mater who I rolled with I was greeted with a friendly smile and words of encouragement. It didn’t matter that I was clearly the most winded dude there, they were just happy to have a visitor come train with them. Truly a loveable bunch of trained killing machines.

To last the practice, my breathing had to become more controlled. I found myself becoming more acclimated to the pace and pressure at 10P SD (for the little good it did me). I was also aided by pieces of advice given by some of the more experienced athletes as they broke my arms.

As the night went on, I became better acquainted with the failures and flaws of my game. Being put into OT conditions with more repetition than I ever had before, I realized my armbar defense left me open to bicep slicers and that I didn’t go to stack fast enough. Soon the weariness was pushed to the back of my mind, and I started to experiment with the new ideas I was being bombarded with. It didn’t magically fix my weaknesses, but I was being put into new positions as a result and felt my understanding grow with each round. The clock became less daunting, and my enjoyment of the practice overtook my exhaustion.

But alas, all good things must come to a end. The buzzer rang at the hour mark and everyone breathed a simultaneous sigh of relief. Almost immediately I was hit with a wave of lightheadedness as I stumbles to my feet. All the fatigue I’d ignored washed over me at once and each step felt like a marathon. Stumbling as I shook hands with other students, I slowly made my way off the mats and slumped against the wall. I was gassed, my arms hurt, and I probably lost six pounds worth of sweat.

The rounds went pretty good, got some sweeps and only got heelhooked once! Afterwards I said bye and thanks to Boogey for the amazing practice.

“No sweat brother, happy to have you! Be sure to come by again soon.”

Before the day, I’d actively avoid a 10th Planet comp class wherein I’m the worst guy. But now? I’m much more willing to jump into the meat grinder.

And should you ever find yourself in San Diego, I can’t recommend stopping by the place enough. It’s a unique dojo with kind people, as well as some top-shelf submission grappling. Don’t worry about your gi, it’ll be there when you get home.