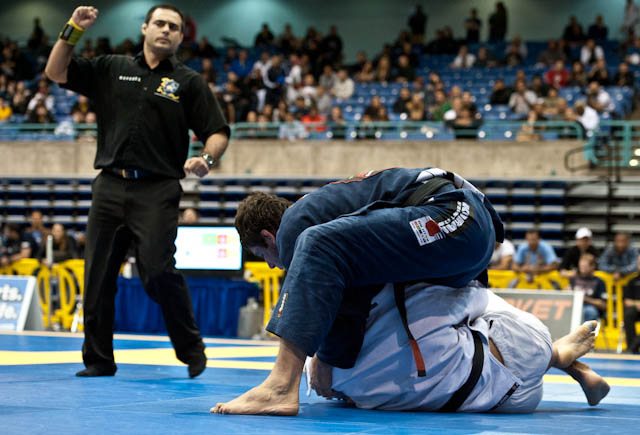 Anyone who has spent time training Brazilian Jiu Jitsu knows that there are two aspects that are heavily emphasized by all clubs: competition and self defense. Some clubs focus more on the self defense side of things. BJJ was originally developed to give people the ability to negate or at least overcome size and strength in physical altercations. On the other side we have competition, which allows practitioners to test the skills they’ve learned against people who have similar skills.

Naturally, as people have developed ways to negate fundamental techniques; newer more unusual tactics have come about like the 50/50, the Berimbolo and other methods that are considered by many unsound in “real life application.” The logic follows that the original “fundamentals” were developed to address basic attacks. An overhand right, a bear hug, a tackle etc. At a certain point people wanted to determine how well their fundamental understanding of the techniques matched up against another person with equal training, this bore new concepts and ideas that have led us to modern sport Jiu Jitsu, which is in essence the art of defeating another trained grappler.

This leads us to the question of “why bother testing it against another grappler?” The question isn’t: why bother testing your technique, because the answer to that is clear: we test our techniques to ensure that they work and that we have not been sold snake oil, like firing a gun off at the range to make sure it in fact shoots bullets. Competition gives us a true testing ground for the best techniques we have to offer. Competition offers us a form of stress inoculation that a friendly roll can never accomplish.

Competition also allows us to gauge our skills relative to other skilled practitioners. It gives us something to look forward to and to prepare for. My brilliant coach Pablo Angel Castro III recently said in class “It’s like playing football. You practice all year round at the very least you should play one game.”

At the end of the day, whether or not you compete entirely depends on you and your own proclivities. You may be a competitive spirited person or you may just do Jiu Jitsu because you find it relaxing. There are many reasons to compete but the decision to do so is entirely up to the individual. Just be aware that when you forego competition, you are foregoing some of the gifts that Jiu Jitsu has to offer.