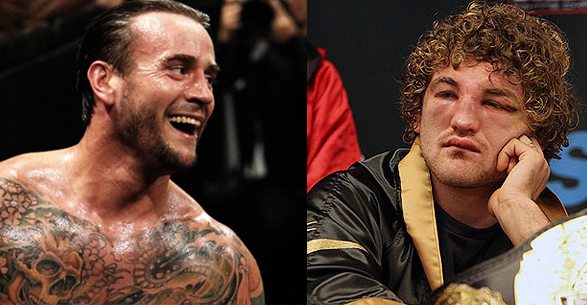 Ben Askren has made major news by his outcry concerning the UFC signing of CM Punk.  He is upset that CM Punk has no unscripted fight record, no MMA fights, and very little in the way of martial arts training.  Ben Askren on the other hand is a three time NCAA All American, two time NCAA champion, a current One FC Welterweight Champion, and a  former Bellator Welterweight Champion.  He also holds an undefeated, 14-0 MMA record with 8 of his fights finished by way of stoppage and 6 by decision.  Ben’s claim is that he is a far better fighter than CM Punk.  This by all accounts might be true. He has a stronger fighting pedigree, a stronger fight record, and is still an active fighter.  Ben by many accounts should be a fighter signed by the UFC.

Many fans do NOT realize that the UFC is not an organization to make great fights.  The UFC is an organization to make money by the use of fights. The UFC prefers individuals where there is little work needed to get the fans and media attention.    This is why WWE legend, Brock Lesnar got a title shot within his first few fights (3 fights) in the UFC, after going 1-1 in the UFC.  This is why future Boxing Hall of Famer, James Toney was immediately signed to fight in the UFC and immediately got a fight with Randy Couture.  Marketable stars make considerably more money with the same amount of work.  They bring in crossover fans, and can easily generate far more revenue when more effort is put in.   Gina Carano who stopped fighting in 2009 and went immediately into television and movies is a target of a return to MMA.  The UFC has consistently been trying to sign Gina Carano to fight Ronda Rousey.      Cris Cyborg (Cristiane Justino) is a far more decorated and experienced MMA fighter and even sent Gina Carano into an unofficial retirement in 2009; but Cris has not been signed by the UFC.  What would be a better fight?  For the fight fan, Rousey vs. Cyborg would be.  What would be a more marketable fight?  For the UFC, Rousey vs. Carano would be.  What would bring in more money? Rousey vs. Carano would be a more marketable and easily the more profitable fight.  This is the economics of MMA fighting.

CM Punk though is not only a well-known professional wrestler but a former WWE champion.  By no means is he the fighter that Ben Askren is, but he is an established star.  He will immediately bring in more money to the UFC and to the sport of MMA.  Any argument can be made to say Ben Askren is a better fighter and almost everyone will agree.  How many can argue that Ben Askren when compared to CM Punk will have a more immediate economic impact on the UFC?